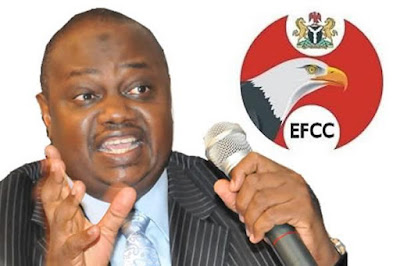 Following the ongoing Senate probe of the activities of the Economic and Financial Crimes Commission [EFCC] under the chairmanship of Mr. Ibrahim Lamorde,

the petitioner, Dr. George Uboh, has released to Elombah.com an avalanche of documents to show that EFCC is sitting on FGN’s 2.051 Trillion Naira.

See the documents below

According to the Chief Executive of Panic Alert Security Systems (PASS) a joint crime fighting venture with the Nigerian Police Force located in Maitama, Abuja, on Naira recoveries alone, ‘In a December 02, 2011 letter EFCC sent to the Chairman, House Committee on Drugs, Narcotics and Financial Crimes, EFCC stated that the aggregate recoveries from 2004 to 2011 (8 financial years) was N1,326,754,554,482:80. EFCC did not mention where the N1.3 Trillion recovered was remitted to. EFCC’s claim that it did not recover up to a Trillion is complete false.

See the breakdown below:

He disclosed further that ” In EFCC’s “SUMMARY OF EFCC MONETARY RECOVERIES 2003-MARCH, 2013” (11 financial years), EFCC stated that the aggregate recoveries for eleven financial years is N497,385,427,485:63; EFCC did not mention where the N497.3 Billion recovered was remitted to, going by the following breakdown also below:

Uboh who stated that the documents submitted were prepared under the chairmanship of Lamorde , went further to disclose that total recoveries to be remitted as confirmed by EFCC are 1.995 Trillion + 48.9 Billion + 7.3 Billion + .4 Billion =N 2.051 Trillion, asking “AFTER RECOVERING OVER 2 TRILLION HOW DID THE FUNDS MELT AWAY?

Not only that, Dr. Uboh promised that he will avail other documents on diversion in the future as the events unfold.

Please sit back and peruse the attached documents:

Law: Contrary to the provisions of Section 36 of EFCC (Establishment) Act of 2004, EFCC failed to remit over 1 Trillion Naira.

In a December 02, 2011 letter EFCC sent to the Chairman, House Committee on Drugs, Narcotics and Financial Crimes, EFCC stated that the aggregate recoveries from 2004 to 2011 (8 financial years) was  N1,326,754,554,482:80. EFCC did not mention where the N1.3 Trillion recovered was remitted to. EFCC’s claim that it did not recover up to a Trillion is complete false.

2) Why do recoveries for the same years differ on different reports?

It should be noted that the two documents submitted were prepared under the Chairmanship of Lamorde.

Page 2, Paragragh 1: In three years, the Commission has recovered over N975 Billion for various levels of Government and for private entities, as follows:

At exchange rate of 230 we have N7.3 Billion Naira

TOTAL RECOVERIES TO BE REMITTED AS CONFIRMED BY EFCC:

AFTER RECOVERING OVER 2 TRILLION HOW DID THE FUNDS MELT AWAY?

Below are some of the methods EFCC steals recovered funds:

Recoveries in CBN account not reflected in audited financial statements.

1) In 2010, CBN’s EFCC account had a balance of 3.3Billion Naira; however, it did not appear in the audited account for same year.

2) The 2009 balance on EFCC account with the CBN as reflected in AGF’s letter to House Committee Chairman had 6.Billion Naira; however, the audited account for same year had 5.6 Billion Naira. Certainly, the 6Billion is not included in the audited report because 6Billion cannot be contained in 5.6 Billion.

Two access bank recovery account statements tendered herein show Opening balances of -0- as of 1, July 2004, but no transaction occurred until June/July 2008 respectively. These transactions are expunged Where are the funds deposited between July 2004 and June/July, 2008?

EFCC diverted and concealed N779 Million Naira of recoveries from Tafa Balogun in its record (aggregate should be 3,037,255,521.60 – not 2,258,100,516.98); Instead of transferring 3.3 billion from Spring bank to its Access bank recovery account, EFCC transferred only 2.2 billion and concealed it by understating the summation of the balances in the various accounts hence the access bank statement had 2.2 Billion Naira after the concealment.

EFCC should be compelled to remit 2.051 Trillion to the Federal Governmentm of Nigeria.

Access bank should be compelled to bring complete and unadulterated statements from 2004 till date.

Aminu Ibrahim and co, Auditors, should be compelled to come and shed light on discrepancies.

No date has been fixed for Continuous Voter Registration ~ INEC