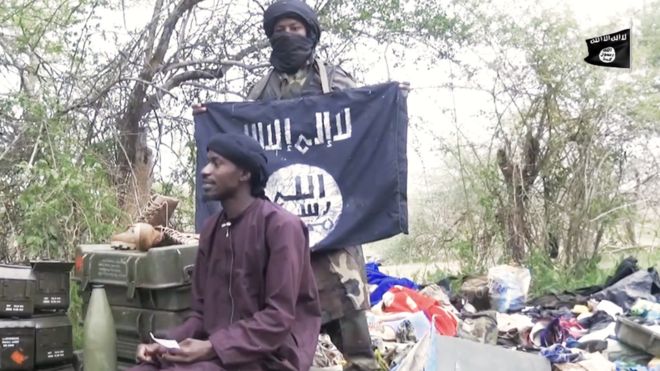 The Nigerian military has been in overdrive in trying to control the narrative of its war against Boko Haram in recent weeks.

It says it has cornered the jihadists and the conflict will soon be over – in line with its mandate from President Muhammadu Buhari to end the crisis by mid-November.

Boko Haram’s eccentric frontman Abubakar Shekau has not appeared in a video since February, when he threatened to disrupt the elections.

The following month he pledged allegiance to the Islamic State group (IS) in an audio message and since IS also reached out to their Nigerian counterpart, Shekau has taken a back seat.

Shekau has released similar audio clips to disprove reports about his death, although the fact that he is not visible leaves room for speculation among the army that they have killed him, as they have claimed on several occasions.

His retreat from the forefront signifies that Boko Haram, also known as IS West Africa Province, now takes orders from the further up the IS hierarchy.

Nonetheless, there was recently room for another message to once again defy the Nigerian government, which sparked the realisation in the military that this game of cat-and-mouse was going nowhere.

Defence spokesman Colonel Rabe Abubakar described Shekau as “irrelevant” and urged Nigerians not to “not to lose sleep over the concocted audio rhetoric of the waning terrorist sect which is a usual antic of a drowning person struggling to hold on to anything to remain afloat”. 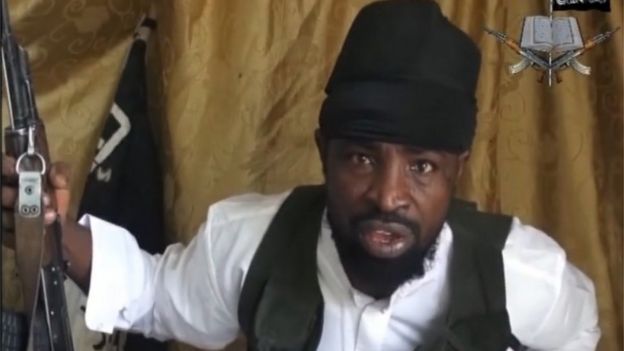 Overall, Boko Haram’s propaganda campaign has waned since the beginning of the year, when it used social media to promote sleek videos showing speeches and attacks.

The latest video, released to coincide with the Eid al-Adha festival in late September, is poorly produced and appears to show fighters praying but there is no indication of how recent all the footage is.

It has been two years since the US placed a $7m (£4.5m) bounty on Shekau’s head but neither he nor his top commanders have been found.

As long as that is not achieved, the group will be able to rethink its strategy, recruit, rearm and develop new methods of operating.

The jihadists have shown that they can continue to inflict significant damage even with few but deadly explosions.

In one recent triple attack, they killed dozens of people in Maiduguri, the city where they were formed in 2002.

Boko Haram at a glance

Seized large area in north-east, where it declared caliphate

Regional force has retaken most territory this year

The news of their abduction grabbed the world’s attention in a way the deaths of thousands before were unable to.

The resulting scrutiny, as well as criticism from human rights organisations, means that the Nigerian military has taken a more cautious approach to the conflict than it did in the early days, when there were frequent allegations that the military was involved in widespread human rights abuses.

The new chain of command means that it is now more difficult than ever before for the insurgent group to agree to dialogue with the government.

As the conflict escalated, Nigeria needed cooperation from its neighbours to secure the borders but this would inevitably come at a cost for Cameroon, Chad and Niger.

Each of these allies has now been attacked, as the IS militants look to extend their reach in West Africa.

Nigeria remains a priority for the Islamist fighters but what was initially a local conflict is changing.

A picture taken on February 17, 2015 shows a Cameroonian soldier carrying a rocket launcher as he stands post in the Cameroonian town of Fotokol, on the border with Nigeria, after clashes occurred on February 4 between Cameroonian troops and Nigeria-based Boko Haram insurgents. 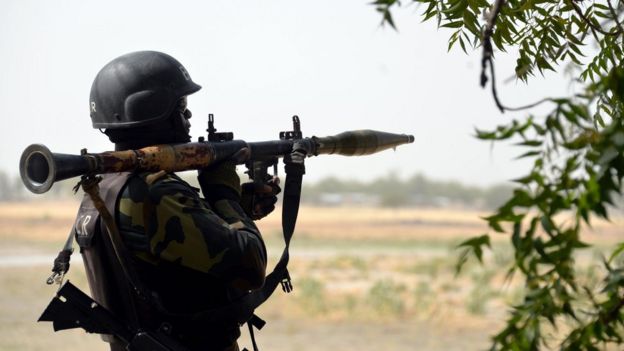 If indeed Boko Haram is defeated in Nigeria, the very fact that the group is now part of a wider international network means the campaign of violence could very well escalate in the neighbouring countries, particularly Chad and Niger, which have broader expanses of land, far more porous borders and are closer to Libya, where IS began its expansion on continental Africa.

For now, the coalition of the African Union-backed Multinational Joint Task Force should be reminded that a wane in the intensity of Boko Haram attacks says little about the strength of the group as a whole.

While aiming to end the conflict, President Buhari should learn from the mistakes of his predecessor, Goodluck Jonathan, who gave a series of failed deadlines to defeat the militants.

Mr Buhari’s government, like many Nigerians, will be hoping for a speedy resolution but by now they know better than to be naive.