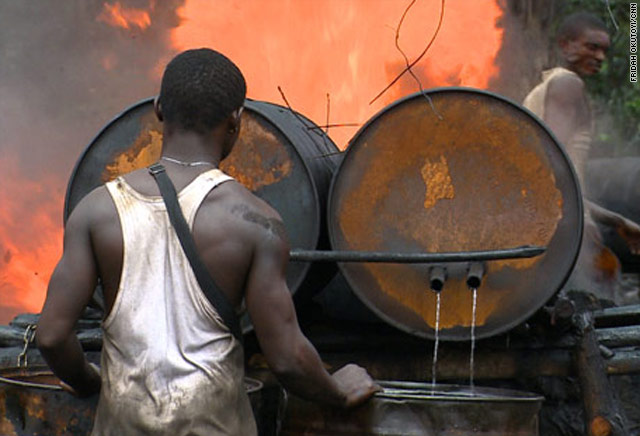 Ijaw People Development Initiative, (IPDI), yesterday, urged the military to stop destroying local refineries in the Niger Delta. Such refineries are not illegal it challenged.

National president of the group, Austin Ozobo, in a press statement, said:

“The local refineries help in controlling price and availability of petroleum, diesel and kerosene products in the country and government should regulate, rather than destroy the technology.”

“It is, therefore, unfair to describe its operation illegal, what is illegal about it, no innovation is illegal, and no technology is illegal in the world.

“The government can regulate its operation and earn revenue from it. It is subject to improvement.

“They should think of improving the robust local technology and stop destroying them.

“The army and navy, which destroy stolen crude or locally refined products are another set of economic saboteurs against the nation’s economic.

“They are not different from oil thieves and vandals because both efforts gear towards bleeding the nation’s economy.”

“That local refineries are not owned by government do not make them illegal.

“The government is sectional and lopsided, that is why they fail to see the beauty of this local technology,” IPDI asserted.

“They help in controlling price and availability of petroleum products in the country, such as petroleum, diesel and kerosene products.

“Nigeria government does not see the beauty of it because it is being operated by people of the most neglected Niger Delta.

“But it would have been welcomed if it were operated by the northerners.”

It further states, “Local refinery bunkering business has created thousands of jobs for interested jobless persons and young school leavers all over the Niger- Delta region and the western part of this country and had drastically reduced crime rate in the region.

“The activities of local refinery have reduced poverty among aborigines in these regions.

“The so- called illegal refineries could be converted to Modula refineries.

“If the govt think it is illegal, let the government legalize it by either issuing operational lichens or permit.

“It can be regulated in such a way that the operators will be buying raw crude direct from NNPC at local price.

Stressing further, IPDI asked: “Of what importance is the destruction of impounded stolen crude?

“It is unfair to destroy it, looking at its economic importance.

“Whether stolen or impounded, such does not reduce or devalue the crude or other locally- refined products.

“If the government is wise, such impounded products can be converted to assist the dying economy.

“Instead of burning it or wasting it, it is better to allow citizen to use it to develop themselves if the government is not being wicked.

“The local refineries help to checkmate activities of militancy and piracies in the region as thousands of jobless persons now earn a living from it.

“Operators of local refineries are not oil thieves, neither pipeline vandals, they buy to refine.

“They are different from oil thieves and vandals and saboteurs, who are seeking pipeline repair and surveillance contracts.

Oil thieves are those, who use vessels and barges to siphon crude from pipeline and export it.

It added: “Local refinery operators buy remnants or spill over from such cartels to refine.

“They buy to refine and do not siphon from pipelines to get their products.

The government of Buhari, its military and navy should have a rethink and stop further destruction of the nation’s economic products.”

It is noteworthy that since the inception of “operation crocodile smile” the military has destroyed many “illegal” refineries in the Niger Delta.

Herdsmen: Family yet to see loved ones after attack