Large crowds have remained on the streets of Sudan’s capital, Khartoum, through the night, ignoring a curfew declared by the military.

Long-time President Omar al-Bashir was overthrown and arrested on Thursday after months of street protests.

But demonstrators say the military council which has taken power is part of the same regime.

The fresh stand-off has raised fears of a violent confrontation between protesters and the army.

There is also a real danger that different elements of the security forces and militia could turn their guns on each other, says BBC World Service Africa editor Will Ross.

The UN and the African Union have both called for calm. 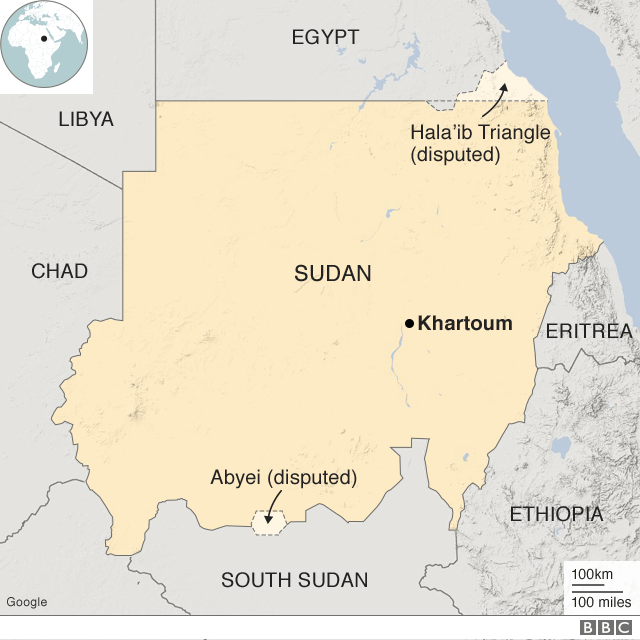 Sudan is due to reopen its airspace on Friday, following a 24-hour suspension, but land and maritime borders will remain closed, the military council has said.

The armed forces and the security council would carry out their “duty to uphold peace and security and protect citizens’ livelihoods”, it said.

What are the protesters saying?

A mood of celebration on the streets of Khartoum, which followed news of Mr Bashir’s arrest, evaporated when organisers called for a mass sit-in outside military headquarters to continue.

“This is a continuation of the same regime,” said Sara Abdeljalil of the Sudanese Professionals’ Association (SPA). “So what we need to do is to continue the fight and the peaceful resistance.”

An SPA statement said that “those who destroyed the country and killed the people are seeking to steal every drop of blood and sweat that the Sudanese people poured in their revolution that shook the throne of tyranny”.

The SPA has previously said that any transitional administration must not include anyone from the “tyrannical regime”.

How did the coup unfold?

State TV and radio interrupted programming and Defence Minister Awad Ibn Auf announced “the toppling of the regime”. He said Mr Bashir was being held “in a secure place” but did not give details.

Mr Ibn Auf said the country had been suffering from “poor management, corruption, and an absence of justice” and he apologised “for the killing and violence that took place”.

He said the army would oversee a two-year transitional period followed by elections.

The minister also said a three-month state of emergency was being put in place, with the constitution suspended.

Who is the military council’s leader?

He has also served as army commander and military intelligence chief.

He is one of a group of officials subject to US sanctions from 2007 over support for the Janjaweed militia which was blamed for mass killings in the western Sudanese region of Darfur.

This is a military coup with no clear roadmap for how the generals plan to hand over power to civilian rule.

The fear will be that they have no such intention. The security elite has calculated that removing Omar al-Bashir and imposing a curfew will buy them time and end the protests. If so, this represents a serious miscalculation.

The SPA and other civil society groups have made it clear they won’t accept a cosmetic change. They have the numbers and are highly organised.

The military has the guns and the capacity for imposing brutal repression. But what then? A crackdown will not resolve the desperate economic crisis that brought years of simmering resentment on to the streets last December.

There is also the question of the cracks within the Sudanese security establishment, evident during the clashes between soldiers and intelligence/militia forces in recent days. It is a volatile and unpredictable situation that demands cool heads and compromise on the part of the military. The stability of Sudan depends on how they react to continued protests.

What will happen to Bashir?

It is not yet clear what will happen to former the 75-year-old, who is now in custody.

He is the subject of an international arrest warrant issued by the International Criminal Court (ICC), which accuses him of organising war crimes and crimes against humanity in Darfur. 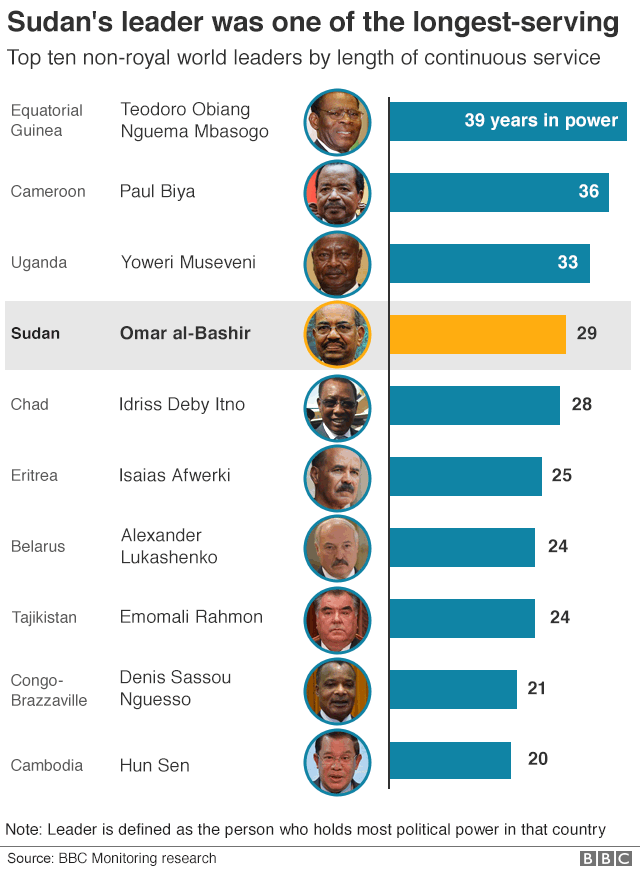 His rule was marked by civil war. A conflict with the south of the country ended in 2005 and South Sudan became independent in 2011.

Demonstrations against his rule began in December, triggered by a rise in the cost of living, and at least 38 people died in the unrest.

The former army officer himself came to power in 1989 through a military coup.

What is the reaction abroad?

UN Secretary-General António Guterres appealed for “calm and utmost restraint by all” and urged a transition that would meet the “democratic aspirations” of the people. The UN Security Council is to discuss the situation in a closed-door meeting on Friday.

UK Foreign Secretary Jeremy Hunt said that a two-year military council was “not the answer” and called for a “swift move to an inclusive, representative, civilian leadership”.

The African Union condemned the military takeover, saying it was not an appropriate response to the challenges facing Sudan and the aspirations of its people.

Russia, which twice hosted Mr Bashir despite the international travel ban he faced, called for calm and said it was monitoring the situation.