Super Eagles Fight From Two Goals Down To Beat Argentina 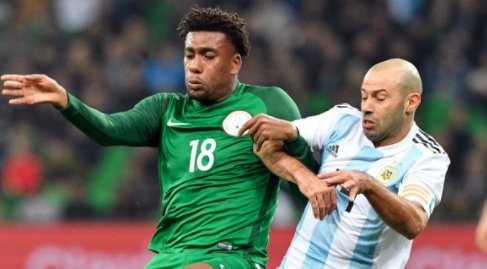 The Super Eagles of Nigeria put up a strenuous fight, coming from two goals down, to beat Argentina in a thriller that ended 4-2 in favour of the African giants in a friendly encounter at the Krasnodar Stadium In Russia.

Argentine La Albiceleste ran ahead courtesy of Ever Banega’s and Sergio Aguero’s strikes in the 27th and 36th minute respectively.

Kelechi Iheanacho struck back in the 44th minute to give Gernot Rohr and his men some flickers of hope before half time.

Upon resumption of the second half, it immediately became clear that some life has been wired into the boys who wasted no time to prove their mettle.

Argentina had earlier beaten Russia 1-0 in Moscow on Saturday at the ground that will host next year’s World Cup.

Messi was left to watch the match from the stands following an agreement with Barcelona.

Banega scored the opening goal on 28 minutes with a well-struck free-kick after Nigeria’s goalkeeper Daniel Akpeyi was fouled for handling the ball outside the 18-meter box.

Aguero, who scored the late winner over Russia, doubled the lead after he converted a right-wing cross by Cristian Pavon.

Iheanacho broke the jinx with a 25-yard free-kick and will later find an unmarked Iwobi in the 52nd minutes who equalised from close range.

An Ahmed Musa pass  which was well driven home seal a second win over Argentina in eight meetings.

Meanwhile, Sergio Aguero was taken to hospital after fainting at half-time in the match against Nigeria.

The Argentine forward has blanked in just 2 of the 8 FPL matches he has played in this season.

After the match, Paris Saint Germain midfielder, Giovani Lo Celso expressed his disappointment at the 4-2 defeat to Nigeria.

He admited that Kelechi Iheanacho’s strike two minutes from half time gave the Super Eagles a huge motivation to fight back and win the game.

Lo Celso told Argentine Football Association (AFA) official website that he was delighted to have added more playing time to his international cap for Argentina in the two  friendlies against Russia and Nigeria.

“We’re leaving with that bitter taste of not being able to win,” Lo Celso told AFA official website.

“I think they (Nigeria) going 2-1 up at halftime, put them back in the game.

“There are very positive things in terms of what the coach intended achieving. Obviously, when one concerns you, you have to give your best for the team.

“I’m happy to have played more minutes, despite the bitterness of the defeat.”