The Independent National Electoral Commission [INEC] has stated that the supplementary governorship election scheduled to hold in Bauchi and Adamawa States will still hold despite court injunctions.

INEC stated this in a press statement issued on Thursday published on its website.

On the states where governorship elections will hold, INEC listed as follows:

It, however, noted that “by Court order, the Commission is restrained from conducting supplementary elections in Adamawa State and collating results for Tafawa Balewa Local Government Area of Bauchi State.

The electoral body, however, said that “State Constituency elections in Adamawa and Bauchi States will hold as scheduled.

“In Adamawa State, elections will hold in Nassarawo-Binyeri State Constituency of Mayo Belwa LGA, which was countermanded as required by the Electoral Act following the death of a candidate on the eve of the Governorship and State assembly elections held on 9th March 2019.

Also, taking to its verified Twitter handle on Thursday, INEC said an interlocutory injunction to suspend the process has been served on the Commission by the Federal High Court, Abuja.

“While the Commission has complied in accordance with its policy to obey all court orders in deference to the rule of law, it has also taken urgent steps to vacate the order and dismiss the action,” INEC said.

It noted that the litigation and consequential order only affect the collation of results for the governorship election in Tafawa Balewa Local Government Area.

INEC tweeted details of the press briefing held ahead of the 2019 Supplementary Elections at the Commission’s Conference Room as follows:

Following the issuance of the Time Table and Schedule of Activities for the 2019 General Elections in January last year, the Commission successfully undertook all planned activities, culminating in the conduct of all but a few of the 1, 558 offices & legislative seats.

Certificates of Return have been given to the President-elect, Vice-President Elect and members-elect of the National Assembly.

Certificates of Return in respect of Governors-elect shall be presented by supervising National Commissioners of the respective states between Wednesday 27th & Friday 29th March 2019. They will be assisted by Resident Electoral Commissioners & Legal Officers of the Commission.

The precise date for the presentation in each state shall be made known by the respective Resident Electoral Commissioners after consultation with the supervising National Commissioners.

For the State Houses of Assembly, the date of presentation of Certificates of Return to the respective winners will be announced in due course.

Supplementary elections will be conducted in 18 states of the federation on 23rd March 2019. Details of the states and constituencies where the elections will take place will be uploaded on our website before the close of work today.

All observers and the media accredited by the Commission to cover the 2019 general elections are free to observe the elections. They will have unimpeded access to the material distribution centres, polling units and collation centres.

Arising from the meeting held on 19th March 2019 between INEC and security agencies, the latter have given the assurances of adequate security, professional conduct and unimpeded access to all levels of the election and collation centres.

The INEC Situation Room will be activated on Saturday 23rd March 2019. Nigerians can reach the Commission via 0700-2255-4632 and its social media platforms (twitter: @inecnigeria; Facebook: INEC Nigeria).

The Commission encourages all registered voters in the areas where elections will be conducted to come out and cast their ballots. We also appeal to all stakeholders for continuous support.

INEC has conducted governorship elections in 29 states & returns have been made in 22 states. While the election was suspended in Rivers, it was declared inconclusive in 6 states – Bauchi, Adamawa (North East); Benue & Plateau (North Central) and Sokoto & Kano (North West)

Following the inconclusive governorship elections in the 6 states, the Commission fixed supplementary elections for the 23rd of March 2019.

The supplementary governorship election earlier scheduled to hold in Bauchi state is now a subject of litigation which was initiated by the All Progressives Congress (APC) and its candidate, Mohammed A. Abubakar.

An interlocutory injunction to suspend the process has been served on the Commission by the Federal High Court, Abuja.

While the Commission has complied in accordance with its policy to obey all court orders in deference to the rule of law, it has also taken urgent steps to vacate the order and dismiss the action.

It should however be noted that the litigation and consequential order only affect the collation of results for the governorship election in Tafawa Balewa Local Government Area.

Similarly, the Adamawa State High court issued an injunction restraining the Commission from proceeding with the supplementary election following the application by the Movement for the Restoration and Defence of Democracy (MRDD), a registered political party which did not take part in the main election. While the Commission has also complied with the order, it has equally taken steps to vacate it and dismiss the action.

Following the violent disruption of the electoral process in Rivers during the Governorship and State Assembly elections on 9th and 10th March 2019, the Commission was compelled to suspend the process.

The Commission set up a Fact-Finding Committee that visited Rivers State and submitted its report which revealed that while election could not hold in a few areas, it was successfully concluded in others with the declaration of winners in 21 state constituencies.

Collation was ongoing at the time of the suspension of the process.

The activities and timelines for the resumption and conclusion of the process are as follows: 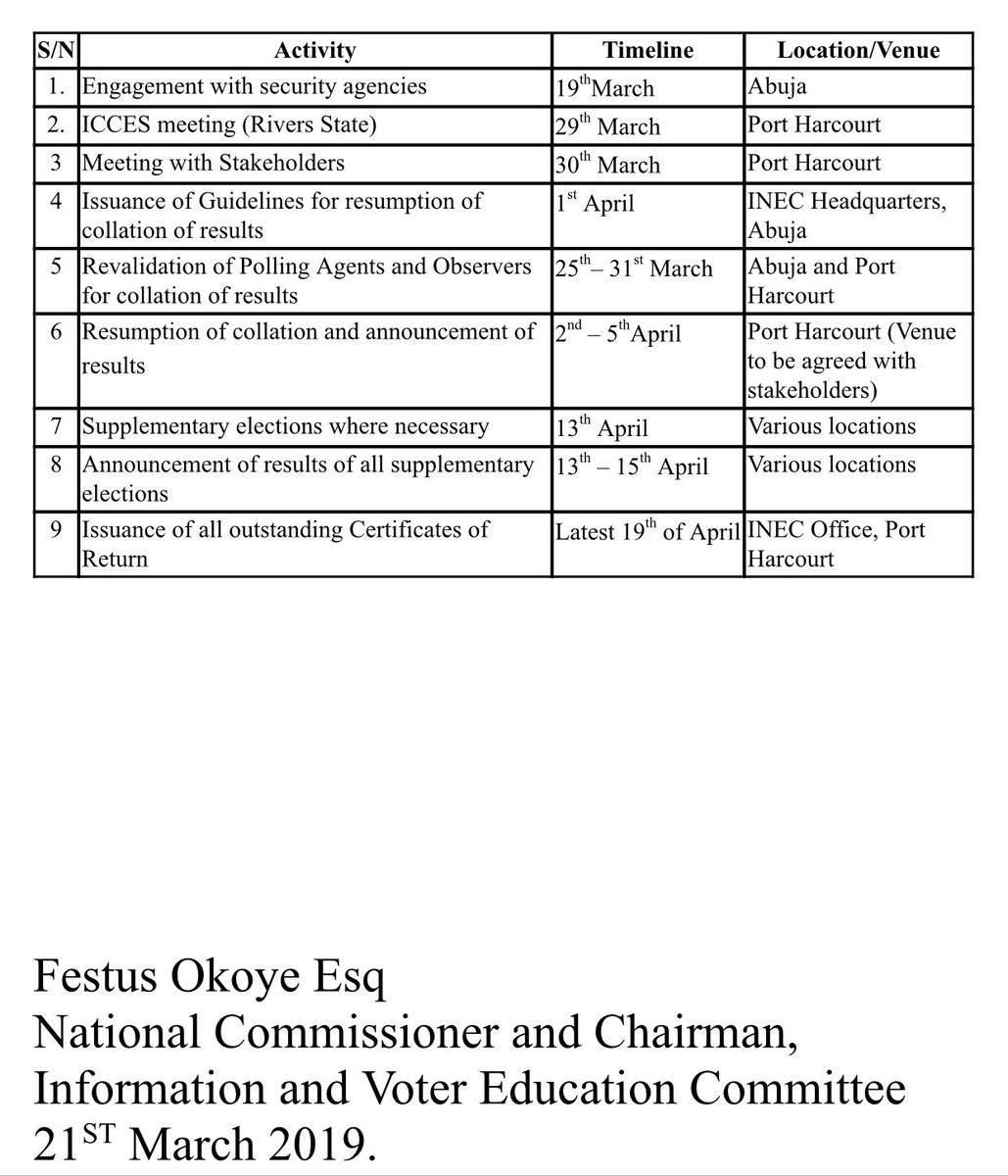 The Exodus Of Nigerian Doctors ~ By Olusegun Adeniyi

INEC To Give Certificates Of Return To Governors-Elect March 27