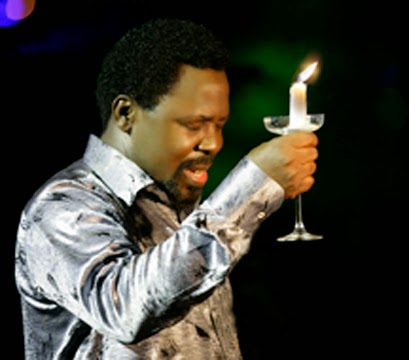 Prophet T.B. Joshua [above] and The Synagogue Church of All Nations [SCOAN] are today holding a memorial service for the victims of the September 12, 2014

building collapse in the Ikotun, Lagos premises of the church.

Though the service holds in South Africa, there are very strong indications that he has sent a delegation from Nigeria to take part in activities leading to the memorial.

The self-styled prophet has maintained that the deceased, mostly South Africans were on an appointment with God when they met their death and therefore believes that they did not die in vain.

Meanwhile, months after a Lagos coroner had passed is verdict calling for the prosecution of the contractors that handled the building of the collapsed structure, experts have warned that the government might have been chasing shadows rather than focus on the real issues that led to the tragedy.

They observed that the way the building collapsed questions the security consciousness of the government, especially in an era when terrorism is becoming highly scientific and sophisticated.

A combatant captain and blasts specialist in the late General Adekunle-led 3rd Marine Commandoes during the Nigerian Civil War, Michael Oyediran who spoke from his Felele, Ibadan residence said that he was alarmed at the September 12 incident and how government inquest handled the matter:

“Considering the evidence of those engineers and the scientist, I became very worried because infrasound implosion was used in my time during the Nigerian Civil War”.

Also speaking on the collapse, Rtd Capt. ‘Tele Olagundoye, also of the 3MCO, said in retrospect: “…I watched the collapse of that building on YouTube. The way it collapsed brought back memories of some of our operations during the Nigerian Civil War and made me fear that terrorism has gone deeply scientific.

“Now seeing the way government is ignoring dangerous signals and chasing after shadows makes me worry that insurgents may have penetrated and tested the ground of Lagos successfully and the authorities don’t know yet”.

According to the insurgent who spoke on Emmanuel TV, they would have carried out their evil plan but for divine gifts of the man of God who kept appearing to him in his dreams.

In spite of all those ominous signs, government treated the whole development with kid gloves until the unfortunate incident happened.

Even though the coroner has since passed its verdict, some observers believe that it failed to consider certain important evidences such as that of a geo-technical engineer of over forty years’ experience, Mr. Afolayan who told the magistrate that the soil under the foundation of the building did not fail.

The CCTV footage which showed the building collapse in less than four seconds and the extensive and scientific evidence of an explosive researcher, Mr. Biedomo Iguniwei which suggested that an infrasonic weapon was fire at the church building by the aircraft that hovered around it moments earlier were all discountenanced by the magistrate.

As the memorial for the victims holds today in South Africa, the entire SCOAN family all over the world join forces to pray for the repose of the souls of their departed.