Frederick Luggard, who forcibly agglomerated discordant and disparate cultures, infamously described the Northern and Southern parts of British-Nigeria as “oil and water” that can never mix. 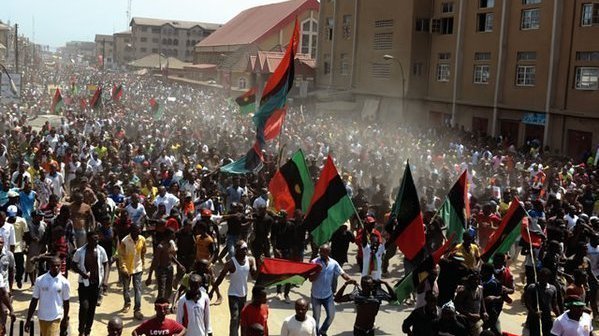 The truth might be bitter, but a sustainable world cannot be built on lies, injustice, treachery, and the blood of innocent Christians. The British government continues to oppress multitudes of Christian Biafrans—a large portion of whom are “Anglican Church” adherents—for the sake of oil and gas plunder.

They continually scorn and toy with African humanity, life, soul, sensibility, ethics, and values; as well as the more excellent virtues, such as “the golden rule” that both “Ten Commandments and Christ” firmly established for humanity.

The British government and elites meddle maliciously even in the face of existential threats posed by Islamic terror expansionism, in addition to incessant pogroms, marginalization, subjugation, and senseless massacre of Christian by her synthetic British-Nigeria. See https://goo.gl/JHOqoA

They leave no room for decent indigenous leaders to pilot the affairs of their people, but instead underhandedly foist highly malignant, murderous, and barely educated puppet feudal oligarchs of Sokoto Caliphate—whose only real world experiences are mostly nomadic cattle herding, wandering, banditry, marriage of preteen girls; and Islamic studies—on Christian Biafrans whom they have nothing in common with.

Frederick Luggard, the soldier of fortune, who forcibly agglomerated discordant and disparate cultures, infamously described the Northern and Southern parts of British-Nigeria as “oil and water” that can never mix.

After one hundred years, British-Nigeria is still entangled in insoluble conflicts because the constituent nations therein still share nothing in common: not language, not culture, not religion, not world views, not clothing, not climate, not food, not aspirations, and not legal or economic systems. The oil and gas fields of Biafraland cannot magically emulsify these insoluble cultures.

The trickle-down “divide and conquer” policy which Britain long ago perfected in the colonial era—as she balkanized and rendered impotent her African colonies—still runs almost exclusively on lies, distortions, sleight of hand, disinformation, intimidation, corruption, impunity, violence, and death to date. And having blindly and tone deafly bought this British bait, hook line and sinker, these Muslim puppets are gleefully entrapped not only in another variant of bondage, but in double coincidence of wants with Britain, where both compulsively gang up to subjugate, kill, and plunder the oil and gas fields of Biafra with satanic puppet-puppeteer fervency.

To exacerbate her ruthless thievery however, Britain romances with the Islamic constituents:  the Hausa-Fulani, and their Yoruba sidekicks who for the sake of fantastic oil revenue, protection, and power; with the additional lure of expanding Sokoto Caliphate (Islamic State) became willing puppets of British imperialism at the peril of Biafrans who are 99% Christians to date.

These puppets are the British physical agents for unjustly coveting the oil and gas fields of Biafra. With their masters blanket protection, they terrorize, disenfranchise, and frequently massacre Christians in the Southeast Delta area; then, distort the truth with their mendacious media bureaucracies.

According to a January 2016 update study by Open Doors USA (ODU) “The headlines focus on the Middle East, but there were more recorded killings of Christians due to their faith in northern Nigeria in 2015 than in the rest of the world put together; 4,028 out of a worldwide total of 7,100 reported deaths.”

“Both Boko Haram and Hausa-Fulani are carrying out religious cleansing, aiming to eradicate Christianity”, ODU concluded.  Yet, some elites of UK and USA are in cahoots to keep these Hausa-Fulani puppets in power to sustain plunder of Christian Biafrans’ oil and gas resources. See clip: https://goo.gl/1sCdPq

By her baits, meddling, and ruthless exploitation, clearly, some British leaders do not respect that all men are created equal, and endowed with certain unalienable rights including life, liberty, pursuit of happiness, and self-determination.

These are Rights Britain has hypocritically established in Britain, and ratified in the United Nations Commission on Human Rights, as well as the United Nations Charter on the Rights of Indigenous Peoples; but hypocritically apply them when it enables her thievery and imperialism; but brazenly subverts them when it challenges her genocidal imperial and “economic interests.”

Consequently, the British are totally culpable in the genocide of more than 3.5 million Christian Biafrans, mostly children and their mothers; as well as the endless stream of pogroms and brazen injustices such as the ongoing arbitrary incarceration of the leader of Indigenous People of Biafra IPOB—who is also a British citizen—by Nigerian president who disregards court orders and the rule of law, but detains “political enemies” arbitrarily. See http://goo.gl/Hiq6Ut

Generally, mass killers and persecutors of Christian Biafrans, such as President Buhari and ex-president Obasanjo, are serially empowered and supported by British government and her cronies.

British-Nigeria by design is incessantly fatal and genocidal to all Christians especially Biafrans; thus, represents perpetual crimes against humanity for which the world must vociferously denounce. Help stop the progressive genocide of Christians and endless spate of massacres in Nigeria. Biafran Christians have already fought and paid every prize there is to pay for freedom, yet still dying, still trapped in the British bondage, still facing existential threats, and still struggling to extricate herself from the implacable rage of British “economic interests” in the evil contraption called Nigeria.

Note that before the colonial era, the marauding armies of Sokoto Caliphate had tried on many occasions to overrun Biafra, but were repeatedly humiliated until they stopped. What they could not accomplish, the British handed them on a platter of gold. Therefore, the Army of Sokoto Caliphate enjoys logistical supports from Britain, USA, and Islamic countries while Christian Biafrans are ganged up against with no similar support.

British-Nigeria uses the revenue generated from the oil and gas fields of Biafra to curry favors around the world to seek more arms to destroy Christians and keep Biafra Christians in Bondage, while using the fight against Boko Haram, which really is the regional army of Sokoto Caliphate, to confound the world.

But even more troubling is America, the most powerful and ubiquitous government on earth, while claiming to be the leader of the free world, seemingly, sees and hears no evil concerning the endless massacre of Christian Biafrans; the British contraptions, and conspicuously arrested development of Africa—set about by forcibly agglomerating discordant and disparate cultures, with criminal intent, to fabricate unviable and tumultuous countries for British “economic interest”—to remain under her watch is beyond shocking; especially since USA also fought to extricate herself from the unforgiving grip of Britain.

Let freedom lovers support indigenous peoples everywhere who wish to be free from tyranny, marginalization, Islamic violence, Jihad, terrorism, as well as imperial meddling so they may gain their natural, equitable, and unalienable rights to be free, independent, and able to develop without the destructive, unhealthy suspicion and rivalry associated with colonial contraptions.

Impunity of British-Nigeria vs. the Leahy Law

Yet, with the spate of human rights abuses, mass incarcerations, countless massacres of unarmed civilians, and mass graves in British-Nigeria, US government still transferred 24 armored mine-resistant vehicles despite the US Leahy Law which “prohibits the Department of State and the Department of Defense from providing military assistance to foreign military units that violate human rights with impunity.” See http://goo.gl/FrlHhC

This supply was done about two weeks after the baseless massacre of 1000 Shiites Muslims. The contemporary history of Nigeria is replete with local invasions and massacres where entire villages were destroyed with armored vehicles or air raided like Odi, Zak-Ibiam, Ogoni, and Christian Biafra protest massacres based exclusively on impunity.

Finally, this petition is for the entirety of humanity. Though it has a racial component, It is not about race, creed, or color; rather, it is about deliberate eradication of Christians, insidious degradation of human beings, violation of human rights, injustice, freedom, liberty, independence, and the “Golden Rule.” Don’t allow this simmering pot of 170 million people to boil over.  Prevent another war and more refugees right now before it is too late.

Although Christians arguably out number Muslims in British-Nigeria, they are hounded and slaughtered as I write.