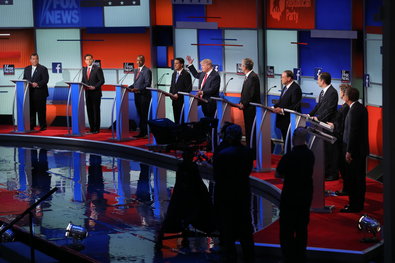 Almost all the regions in Africa have experienced terroristic attacks or are prone to terror threats. In East Africa there is Somalia and Kenya. On the West you have Nigeria and

Cameroon. In the Sahel region there is Mali, Tunisia, Egypt and Libya.  While America may not have the sole responsibility to fight terror wherever it occurs or threatens to occur, it will help to know that a potential United States President recognizes the potential catastrophic effect of a terror ravaged African continent.

So naturally, as a Nigerian where Boko Haram has become a serious torn in every aspect of the country’ life, I watched last Thursday’s Republican Primary debate along with twenty-four [24] million other viewers hoping to hear something that recognizes the problem.  So when all the presidential aspirants focused on the Iran deal one couldn’t help but wonder if the war on terrorism has been won and done with.

Terrorism is no longer about Osama Bin Laden and Al Qaeda. It has taken a more nitty-gritty global stance. It seems that any serious talk about combating terrorism without a well-articulated policy that addresses the African factor would be futile. Africa is the new breeding ground for terror elements. Lack of sophisticated intelligence and military resources make the region very vulnerable to terror groups such as Islamic state and Boko Haram.

Poverty and ignorance, serve as very potent manures for the recruitment of these illicit solders of destruction. When glazed over with corruption in both high and low places, it becomes a ticking time bomb. For argument sake, had America gotten everything it wanted and expected from the Iran deal, would it amount to the end of terrorism in the world? I doubt it.

The debate appears to be some sort of an informal elimination process. But even then, most people watched with one interest or the other in mind. You didn’t have to be a Republican to watch. This is one of the inspiring rituals of the American political process and the anticipation leading to last Thursday did not flop; not with the Donald Trump axis of uniqueness. Too many cooks they say spoil the broth.

The crowded stage may not have allowed for more time to discuss every issue that the viewers may have wanted to hear. Once the issue of terrorism came up, it should have gone way beyond the Iran deal. After all, one thing that has always been a bone of contention for American presidential candidates is foreign policy. If memory serves me right, it was a sinkhole for Sarah Palin in 2008 when she was picked as Senator McCain’s running mate.

The press could not get enough of her when she thought Africa was a country and not a continent. The world has dramatically changed since 2008 and the spread and dynamics of terror activities have likewise changed. It follows then, that the confrontation of this global problem cannot be selective but all inclusive.