Text of press briefing by NLC President on Action Against Corruption 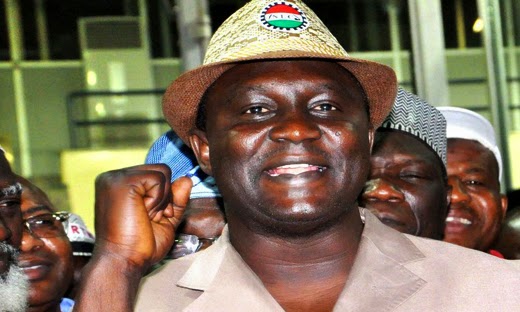 Against Corruption  And For Good Governance

Under the heading of ‘’Labour Democratic Consolidation’’ The new leadership of NLC made firm commitment to vigorous campaign against corruption at our March 2015, 11th Delegates Conference. It is our conviction that the campaign needs to be intensified and sustained because of the corrosive effects of this malaise in our quest to develop and provide for the vast majority of Nigeria people, who are being deprived of development by corrupt public officers and their collaborators.

This policy thrust predated the March/April, 2015 general elections in the country.  It was a continuation of the Congress’ traditions that inspired: the Furniture Allowance protest against the National Assembly in 1999; the 2008 protest against the USD$16 billion purportedly spent on power, without one megawatt of power generated; the 2010 Ettegate Scandal in the House of Representatives, and; Congress’ several campaigns against the incessant increases in the prices of petroleum products, especially during the reign of President Obasanjo.

Therefore, those who have argued that an anti-corruption campaign at this point in time is at best a distraction, and that we ought to be fighting only against non-payment of salaries and other worker-related issues, for instance, miss the fundamental point.  Workers in the States whose governors owe backlogs of salaries have since been combating them, under the general direction and leadership of Congress.  The fundamental point is that these workers found themselves in this precarious situation precisely as a result of corruption and maladministration by public officers.

The defeat of the ruling party at the centre during the March 28, 2015, general elections, after 16 years of continuous rule, provided an opportunity for the federation account management to be subjected to closer scrutiny.

Similarly, in the States where a ruling party was defeated by the opposition, news of unprecedented maladministration has been trickling out continuously since the May 29, 2015 handover of the baton of governance. We cannot, therefore, as Congress, remain mute, and keep silent, even as we see before our very eyes the destructive effects of corruption and maladministration in virtually every facet of our national life.  As organised labour we wish to make it categorically clear that there is a meeting of point between President Buhari’s anti-corruption posture and ours. But, we had independently formulated our programme before the advent of his administration, and its pursuit at this point in time and always is not based on any form of partisan support.

Having stated this, we however have no apologies to offer to anyone who might still persist in holding the erroneous view that we are carrying out an agenda of any group in our determination to raise the collective voice of organised Labour and its allies in the fight against corruption in our dear country.

The mindboggling extent of the figures emerging in terms of what have been corruptly siphoned out of our national treasury is such that those of us holding positions of trust on behalf of Nigerian workers would have sleepless nights if we do nothing to demonstrate our abhorrence of such massive theft.

During his first official visit to the United States of America, following his inauguration, President Buhari disclosed to Nigerians in the diaspora that, in the last decade alone, Nigerian lost USD$150 billion to corruption.  Serving ministers in the last regime, he informed the world, had been lifting between five hundred thousand and one million barrels of crude oil daily, channelling the proceeds into individual private accounts.  One of the governors on the President’s delegation added to the bewildering news from America, that American Officers informed them that one minister alone made away with USD$6 billion from the treasury.

In the twilight of the administration of the last regime, there were allegations by no less a person than the former Governor of the CBN, Lamido Sanusi Lamido that billions of dollars reportedly was unaccounted for by the NNPC. This led to his eventual suspension from office as CBN Governor.

NEITI indicated losses due to crude oil swaps to subsidy and domestic crude allocation from 2005 to 2012, showing that USD$ 11.63 billion had been paid to the NNPC, but that “there is no evidence of the money being remitted to the Federation account”.  NEITI also discovered that another USD$11.6 billion was missing from Nigeria’s LNG Company Dividend payment.

There were also reports of billions of Naira missing from the pension fund administration, as well as the N32billion police pension fund fraud, to cite only a few of the figures in the public domain.

In the words of President Buhari recently, “for millions wallowing in want and diseases, corruption is a major reason why they cannot go to school, why they cannot be gainfully employed, and why there are few doctors, nurses and drugs in hospitals and health centres”.

Continuing the President said that corruption is “the reason why pensioners are not paid and why portable water is scarce”.  Corruption certainly diverts public resources meant for millions of our people into the private pockets of a greedy few, thereby causing the massive sufferings and deprivation that is currently the order of the day in the country.

Former Minister of State for Finance, Mr. Remi Babalola, who chaired the Federation Account Allocation Committee (FAAC) between 2007 and 2010, disclosed for the first time that he resigned from former administration because he could not bear the mismanagement of public resources during his days in office.

He said:  “Our Culture of impunity is the bane of the entrenched corruption in our society…… mismanagement and misallocation of resources, coupled with an unprecedented level of corruption has been at their highest in the history of our nation in the last 6 years.  Performance or success in public space was measured by the conversion rate of public funds into private accounts.  It looks as if democracy has been substituted with kleptocracy”.

Internationally our rating on the corruption and maladministration indexes are similarly very damning.  Transparency International’s assessment of Nigeria ranks us 136 out of 176 countries with a score of just 27 out of 100 on its 2014 corruption perception index.

Also, the Global Financial Integrity estimates that more than USD$157 billion left Nigeria illicitly in the past decade.

WHAT SHOULD BE DONE

From what we have enumerated above, there is agreement about the fact that corruption has badly damaged the core of our national existence.  However, there is no agreement on how as a Nation, we can get out of the quagmire we now find ourselves in.  As organised labour, we firmly believe that the political leadership of our country must act decisively to get us out of the brink of disaster that greed and primitive accumulation through the open looting of our commonwealth in the last six and more years, has brought us to.

The National Day of action  scheduled to hold nationwide on Thursday, 10th September,2015 will demand from our political leaders at all levels Accountability and good Governance, and the following:-

1.     Ensure that all funds identified to have been illegally taken from the common treasury are traced and recovered to the last kobo, and perpetrators prosecuted.

2.     We support and call for the establishment of special anti-corruption courts to try corruption cases in the country.  Realising that those who have looted our treasury have become adept at using loopholes in the procedures of regular courts to delay and in several cases subvert the cause of justice, it is our firm belief that the enactment of special anti-graft courts akin to the electoral tribunals, complete with timeframe within which cases once started are to be concluded, will give a renewed impetus to the fight against corruption.  For this to become a reality, the executive and the National Assembly must work together to give us the necessary laws for an enduring fight to defeat this national malaise.

3.     There is also an urgent need to review and strengthen our anti-corruption laws, and provide for stringent punishment for looters, to serve as deterrent.

We urge the Prof. Itse Sagay Presidential advisory committee on corruption to comb all our anti-graft legislations and make the appropriate recommendations for their tightening for effective fight against corruption.

4.     The anti-graft agencies should as a matter of urgency extend their search light to the other two tiers of government; the States and Local Governments, as it is a commonly known fact that the level of impunity and lack of accountability at these levels is even more brazen than at the Federal level.

5.     The declaration of assets as demonstrated by Mr. President and   Vice President is a moral demand by Nigeria Workers; we call on all public and political office holders to declare publicly their assets.

In this direction, we call for the appointment of anti-graft judges provided for in the ICPC Act, which is supposed to be for each of the 36 States of the Federation to exclusively handle corruption related cases only.  Thus far, from available records, it is only in Lagos State that we have such dedicated court.

The Nigeria Labour Congress is committed to partnering with both the executive and legislative arms of government so that together we can give a fatal blow to the evil that corruption represents in holding down our nation from developing. We also call on all workers to stand firm as anti-corruption crusaders in their workplaces. This would entail transparency as a guided work ethic of note and the exposure of any acts of corruption they identify. Congress’ will stand by any worker who takes this bold step of revealing corruption in low and high places.

United together in this struggle against corruption and for good governance, we will bring about the renewal of our great country and enthrone social justice, inclusive growth and prosperity for all.

We the south-south are indebted to the Igbos