The Corruption and Evil of Employment Scams in Nigeria

Some of us do not see anything wrong in some retarded and murderous opportunists looting and sharing our commonwealth. In fact, we celebrate them and sing their praises. 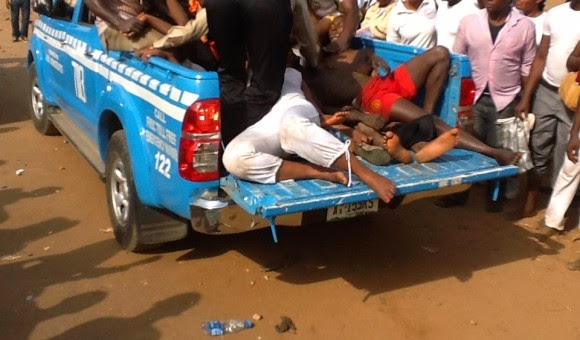 This article has been written in sad response to two recent “employment advertisement” scandals that have involved (or, rather, been repudiated) by the Federal Ministry of Labour and Employment and the Guaranty Trust Bank respectively. I am particularly annoyed as I sincerely send such job alerts, recruitment adverts, etc. to hundreds of young people in Nigeria I feel that I can help, even though I cannot personally provide jobs for them, or influence their chances of getting jobs; all I can do is make job opportunities accessible to them by informing them of these adverts. I now find myself in the very awkward and uncomfortable situation that I may have been inadvertently sending false recruitment and employment news to these young people. I am sorry.

I have always affirmed that we are a very bad, irredeemably corrupt and evil society (and I remain convinced that is so). See some my articles on this (Nigeriavillagesquare.com and other online and newspaper publications):

*A people beyond redemption;

*A Peoples Aversion to the Truth is their Undoing;

*Our Own Worst Enemy: The Iniquities of a People;

*A Virulent Form of Absurdity: When Society and Politics Go Insane;

*A Flawed and Vague Sense of Morality and Conscience;

*Transforming Ibadan: A Study in Resistance to Change; etc.

A very wicked people to ourselves!! I don’t know why we are like this. Is it because of the hard times we are going through that has turned us into obtuse, conscienceless monsters; against each other; taking advantage of each other, cutting corners to acquire wealth and power by all means? Or is it in our culture and tradition? What do these fake news apostles have to gain – money, power, notoriety? Sometimes, money is not even involved, maybe just a warped sense of humour or sadism at its worst.

Apart from being notorious specialists in official and government corruption, we are also known the entire world over as fraudsters and drug smugglers. The foul smell of corruption and crime follow Nigeria’s citizens everywhere we go in the world and show our green passport or our names.

Now we are gradually becoming notorious for creating and spreading false and fake news to distract and confuse the government and the public in general.

Things were not like this when Nigeria was “good”; when we were growing up with a deep sense and upbringing of decency and morality, as well as the teaching and tenet of “Love – and take good care of – thy neighbour”, up till the 1980’s. What happened to us? Can we get out of this quagmire of hopelessness, poverty, despair, desperation, deceit, deception, insecurity, conscienceless impunity and insensitivity that we have found ourselves trapped in though decades of poor, vision-less and focus-less leadership, exacerbated by dogmatic and blind follower-ship that is leading us every day to the edge of a chasm of bankruptcy and non-nation?

What have we done to ourselves? And we keep praising bad governments (federal and state) and celebrating corrupt politicians, civil servants and selfish, dodgy business moguls? And queuing behind regional, tribal, religious, political and selfish interests?

Some of us do not see anything wrong in some retarded and murderous opportunists looting and sharing our commonwealth? In fact, we celebrate them and sing their praises to high heaven.

The alarming and shameful thing about this is that even the official government is, was, or has been involved. For example, the Immigration recruitment scam of 2014. And now the fake Federal Government directive asking our young people to troop en masse to federal secretariats to submit their CVs. Whoever thought of such a fraud or fake mass news should be shot! Banks and companies are also involved in denying advertising for recruitment after such adverts have gone viral. The poor, hopeless, hapless young graduates of Nigeria are the vulnerable victims!

It is a sad fact that in Nigeria of today, the unemployed youth and graduate face an uphill task in surviving in their own country and society. This is mainly due to leadership deficiency which has no clue as to how to solve the problem of unemployment and creating jobs in the country. The evidence are there to see littered all over the national landscape – abandoned factories and moribund infrastructure, while people in government are able to spend money of new, useless and economically unviable projects, just to satisfy their ego, and this is apart from directly stealing money that could have been used to generate or create employment.

This is compounded by a noxious environment of inordinate and wicked corruption. Apart from candidates facing discrimination due to their ethnicity, religion and regionalism, they also face bribery and corruption from officials. It is a well-known fact that many government agencies, institution, ministries and departments actually demand huge sums of money from candidates in order to be employed. The same also obtains in some banks, industrial companies and even private employers all over Nigeria.

Also, these employers are known to have asked candidates to buy employment application forms, and these include federal and state governments (Shame!). Female applicants are even more vulnerable as they sometimes have to succumb to sexual demands in order to secure employment. Shame on all those degenerate old men !

In many cases, it is the existing staff of these organisations that benefit, as they corner the application forms and procedures and inform only their family members or friends. Nepotism and corruption go together. I learnt that in a particular case with the Civil Service Commission employment exercise, where candidates were asked to apply online, parts of the forms did not even exist or could not be downloaded, but the real forms were known only to existing senior staff to direct to their friends’ children and their own families.

I am not even going to write about the notorious Immigration scam that led to several deaths sometime in 2014. It is happening in all government departments and agencies. It is impossible for one to be employed in most government – federal, state and local – positions nowadays unless you know somebody or you are ready to bribe or grant sexual favours. And of course, many jobs in government are never advertised; the senior staff just hand employment letters to their own family and friends.

This is not a cause to be making humour of. It is pure wickedness, evil and is a reflection of our depravity and moral decadence; our downward spiral as a people and society. It is man’s inhumanity against man.

So what solutions do we have to overcome this problem, which is getting worse by the day? The government must not only intervene but our orientation, mind-set, moral perception need to change or we are doomed. It must be a collective effort to start fighting this evil perpetration on our youth. There must be a viable, enforceable employment laws, regulations and bye-laws.

My suggestions are by no means exhaustive.

Melaye dines with IDPs on birthday; doles out cow, books