The Ghost of Thomas Sankara and Abiola of June 12

The Sankara ghost is haunting Blaise Compaore in particular and Burkina Faso in general. And so shall it be until justice is done and the whole truth revealed in the sordid affair. 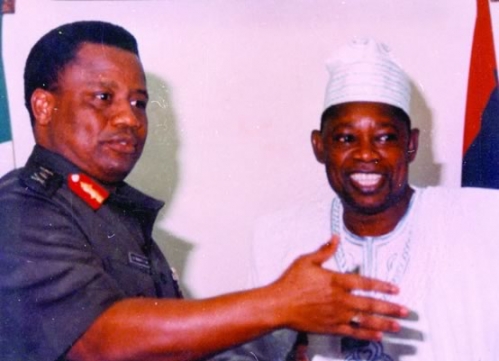 Abiola’s friendship with IBB, Abacha led to his death

October 15th, 1987, would forever remain indelible in the annals of political history in both Burkina Faso and Africa. For on that day of infamy, the youthful revolutionary leader of Burkina Faso Captain Thomas Isidore Noël Sankara was gruesomely assassinated by forces loyal to the former President, his erstwhile best friend, Blaise Compaore.

It was one grisly assassination too many! Sankara was brutally shot dead along with some of his aides and their bodies were dumped in an unmarked commoner’s grave in the Burkinabe capital city of Ouagadougou. Does that remind us, Nigerians, of the fate that befell the late Ken Saro-Wiwa and Mamman Vatsa? We shall come to that later.

Thomas Sankara, a charismatic 38-year-old army Captain who took office after leading a revolution was a pan-Africanist and a proud reformer. He was an ascetic officer who told hard truth to the then colonial power, France, without fear. He embodied greatness in leadership and inspired his poor people to follow him faithfully.

His erstwhile second-in-command and successor as President, Blaise Compaore, had done everything he could to put memories of comrade Sankara behind him but he had failed in that regard. His corpse was recently exhumed for forensic examination as his wife Mariam and children await justice after many decades.

Much of the adulation that continues to surround Sankara comes from a reputation for incorruptibility in a poor continent of fabulously rich Presidents, and from his self-confident stand toward the West. In a popular stroke of political genius, he re-baptized the country Burkina Faso, meaning “land of upright people” giving his people a new sense of national pride. He mobilized them and galvanised them for national rebirth, one that centered on self-pride and hard work.

Blaise Compaore as President smartly operated in two diametrically opposed worlds: diplomacy and state terrorism. While he used the diplomatic face (through international crisis mediation) to woo and hoodwink the international community as a seasoned democrat and diplomat he used the other dangerous hidden face as a murderer, plunderer and crude manipulator. The Janus-faced Blaise was a study in guile and hypocrisy. His regime was a profile in executive reprobacy!

He had ruled for 27 uninterrupted years (using effectively the notorious Presidential Security Regiment, RSP) until October of 2014 when his latest attempt to modify the constitution to rule till his death was thwarted by the new mobile generation who dutifully set ablaze Ouagadougou in a revolution that changed the nation for good.

Blaise thus fell and ran away to exile in neighbouring Ivory Coast where he is still holed up under the threat of international arrest warrant and extradition to face trial for multiple crimes committed while in power. His blood brother Francois Compaore was not exempted from many crimes as he served under Blaise as “Economic Adviser”. He was accused of being behind the death of his personal driver David Ouedraogo and journalist Nobert Zongo!

The newly-elected and sworn-in Burkinabe President Roch Kabore is fully in support of Compaore’s extradition back home from Abidjan so that he could be given the chance to tell the world why and how he organized the brutal killing of his friend and answer to other charges of state terrorism levelled against him.

The Sankara ghost is haunting Blaise Compaore in particular and Burkina Faso in general. And so shall it be until justice is done and the whole truth revealed in the sordid affair. But besides Sankara and his ghost tormenting those behind his untimely demise other ghosts abound in Africa doing as much. Africa has witnessed a lot of bloodletting and executive bloodshed that the souls of the dead could no longer rest in peace. They are everywhere seeking elusive justice and crying out for moral reparation.

In Kinshasa and other cities in DR Congo the Patrice Emery Lumumba ghost is still very much around making it impossible for the country to organize itself with its vast natural resources. With Mobutu Sese-Seko in power Lumumba was caught and tortured to death in 1961 for daring to speak truth to colonial power. As Prime Minister he had fiercely resisted the colonial meddlesomeness of Belgium and called their bluff.

On one occasion he had told the bewildered Belgian neo-colonial masters that the Congolese people were no longer ready to accept the diktat of foreign powers calling black white and otherwise! He was marked out as a ‘nuisance’ that must be eliminated for the overbearing interest of the imperialists to be preserved. Today over half a century after the grisly assassination Kabila the son is still finding it difficult to rule over the vast country — ostensibly ‘cursed’ by the Lumumba ghost.

The combined ghosts of Dele Giwa, Vatsa, MKO and Kudirat Abiola are still traumatizing the ‘evil genius’ Ibrahim Babangida even in retirement. And that of Saro-Wiwa, the great Ogoni environmental rights activist who was hanged and his corpse sprinkled with acid by the Sani Abacha regime, haunted the goggled dictator to his grave! IBB and Abacha killed many Nigerians but the aforementioned would ever remain engraved in our collective memories.

While IBB executed his best friend Mamman Vatsa over alleged coup-plotting despite pleas for clemency, the case of Dele Giwa would remain evergreen in our consciousness given its audacity of execution and enduring impunity. Citizen Giwa was a great journalist trained in America. He founded Newswatch magazine in Lagos and became a journalistic celebrity for his professionalism, courage and investigative drive.

And one fateful morning as Dele was bantering at home with one of his foreign correspondences Babangida’s security agents delivered a parcel bomb to him and upon opening the package he was blown to pieces in the presence of his son Billy! Many years after no one had ever been held to account for Giwa’s murder but the ghost is very much around crying out loud for justice.

The late Bashorun MKO Abiola’s case remains one of man’s inhumanities to man and the military nonsense in our national political life. Here was a great man, a philanthropist, billionaire business mogul who used “Hope 93” as a mass mobilisation strategy for democratic power conquest. June 12 1993 presidential poll came and Nigerians in their millions bought the promised idea of change and hope by voting overwhelmingly for Abiola over Bashir Tofa. And he won a landslide victory in a free and fair electoral contest between the defunct SDP and the NRC.

But Babangida and his power-thirsty goons had other sinister plans, a hidden agenda that culminated in the unceremonious annulment of the outcome of the poll. It was a giddy moment of dictatorial madness, an unpatriotic demonstration of the insanity of ‘Maradona’. The political chicanery called transition programme that lasted eight years and gulped billions of Naira ended up creating more crisis that took souls away following the exodus to the hinterland!

IBB was forced by a popular uprising to beat a hasty retreat to Minna while leaving behind ‘Khalifa’ to finish off the job — scuttling the electoral wish and will of Nigerians as expressed on June 12. Soon after while MKO was still languishing in detention Kudirat was gunned down on the streets of Lagos! Abiola, who doggedly refused to compromise the mandate, was liquidated in prison via a tea-drinking conspiracy involving the Abdulsalami Abubakar regime and some international diplomats on a mediation mission.

Another ghost haunting IBB is that of my good student friend, citizen Osas. Still in Benin City doing our higher education, Osas and I were among those that thronged the Oba’s Palace to welcome Abiola as he dropped by to pay homage to the revered Benin monarch. Osas and I were also present at the Sakponba Road end of Ring Road as the “IBB-Must-Go” demonstrations rocked the city and brought it to a standstill following the June 12 crisis.

Full of life and energy associated with youthful exuberance coupled with imbued radical instincts we stood firm defying the soldiers and mobile policemen ‘imported’ from the north to kill and maim. Chanting war songs Osas was suddenly hit by a live bullet and he slumped to the ground! Standing beside him I saw him go down crying out in anguish: “Sunny, they have shot me! They have killed me!!” We ran for our dear lives as Osas laid there on the ground in the pool of his blood. I later learnt, with broken (heavy) heart, that he had died on the way to the hospital!

What went through my young mind then as we mourned Osas was that it could have been me or any other person for that matter. May his soul and those of Giwa, Abiola, Kudirat and Saro-Wiwa continue to rest in peace!