Welcome to a new Legislative day in the Senate of the Federal Republic of Nigeria.

DSP Ike Ekweremadu cites order 43 and speaks about an article from the Attorney General of Kogi State in Today’s Leadership Newspaper stating that the Senate does not have a role in the recall process.

Ekweremadu states that according to Section 68(2) of the constitution that the Senate does have a role to play and he stands by his decision.

DSP says when the Independent National Electoral Commission [INEC] is through with the recall process, it has to be sent to the president of the Nigerian Senate who will in turn read to all Senators.

SP Bukola Saraki says the constitution is very clear, spending about 10 million for adverts shows the Govt is involved; it is very unfortunate for the people of Kogi State.

Senator Buhari Abdulfatai seeks for a MOTION about the ongoing strike in Ladoke Akintola University.

SP Bukola Saraki approves the MOTION for the next Legislative.

Senator David Umaru cites order 42 & 52 and raises a MOTION for the flood that affected Suleja and other areas.

I) Commiserate with the people of Niger & Lagos and other affected areas.

III) To Urge Nigerian Meteorological Agency [NIMET] to intensify weather forecast and other efforts in areas that are likely to be affected by flood.

IV) To call on the Federal Government as a matter of urgency for immediate construction of drainage systems.

V) To call on Federal Government at all levels to take seriously weather forecast.

VI) To observe a minute silence for the victims.

Senator Gumel Abdullahi seconds the Motion and states that we need to attend to the issue with urgency.

Senate now moves into the Presentation of BILLS.

A bill on corporate manslaughter is now up for 2nd reading on floor of the Senate. You can follow it with this LINK.

5 BILLS were presented for first reading.

Senator Gershom Bassey seconds that the Senate do receive the Conference Committee Report.

3. Report of the Committee on Foreign Affairs

Senator Mohammed Hassan seconds that the Senate do receive the report of the Committee on Foreign Affairs on the Extortion of Pilgrims. 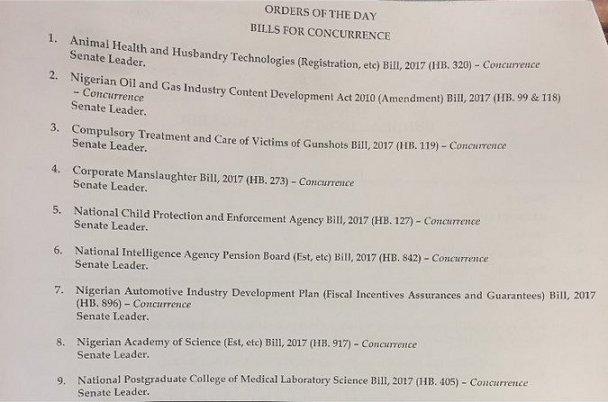 El-Rufai, We Remember The Massacred, Hatred & Insults ~By Steven Kefas