The threat of arrest and lawsuit by the Imo State govt 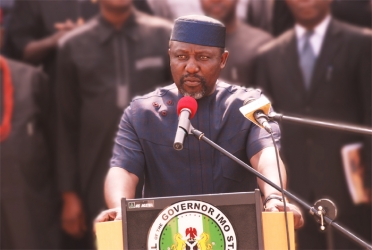 of Imo State via his Chief Press Secretary, Mr Sam Onwuemeodo threatening arrest and court actions against those criticising his government.

Sam said ‘’ the government of Imo State has decided to begin to explore the laws of the land to check the lies or falsehood published against the state. Since 2011, the governor or the government has never taken any legal action against anybody or establishment over these unfortunate lies, but has now decided to be doing that since that is the only way the truth or otherwise of these allegations can be unveiled’’

YARPTI is against anyone publishing falsehood against anybody. Doing that amounts to libel. But the question remains, things written against the governor of Imo State, are they false? Anything that is proved to be true cannot be libellous.

Since libel by definition is falsehood against a person, do we consider a report of something that is true by a journalist or a critic to be libellous? Truth is the reporter’s best defence against a libel. We also have what we call fair comment and criticism which covers a journalist. The fair comment and criticism defence allows reporters to express opinions no matter how scathing or critical.

YARPTI believes that Governor Okorocha should know that when a man is placed in the public arena he must be prepared to accept public criticism. To us he has become so panic and grown goose pimples over the mass backlash against his too many anti-poor and anti-peoples policies. This is why, besides his latest planned unjust arrest and unlawful detention of Social Crusaders, Journalists and Activists, he wants to use the court to shut people up. So where is the hope for the common man in Imo? As it is, it is clear that we cannot get to the Promised Land in Imo with these greedy, selfish and thieving politicians who are more loyal to the oppressors of their own people.

We believe that Okorocha’s threats of court actions against critics and the media is the round two parts of his despotic measures aimed at suppressing free speech. We cannot forget how his government arrested and detained an Owerri based Activist Samuelson Iwuoha together with his wife for 11 months.

The Coordinator of YARPTI and YAHVCP was also chased here and there with the police and invited to one probe panel and the other via radio, newspapers and television. This characteristic despotism of the Okorocha’s government, which further confirms its lack of commitment to genuine democratic culture, is a throwback to the era of military jackboot absolutism with its associated abuse of the fundamental rights of people to freedom of expression, among others.

Governor Okorocha should take criticism as a challenge to put more effort in his work as a public officer or write a rejoinder in response to the articles. We will resist any attempt to suppress free speech. We strongly assert that Imolites have fundamental rights to peacefully protest against any anti-people action of the government of the state, let alone the Okorocha’s government that massively rigged and manipulated the 2015 election against the wish of the people and is imposing hunger and sufferings on Imo in a do or die manner.

YARPTI’s struggle against Okorocha is linked with daily struggles of workers and poor masses of Imo State for functional education, electricity, decent jobs, water, health care, good road, food and other basic needs of life as well as the fight against corruption in government

1999 Nigerian constitution in section 24 pointed out that the duty of every citizen is to make positive and useful contribution to the advancement, progress and well-being of the community where he resides. The right to freedom of expression is recognized as a human right under Article 19 of the Universal Declaration of Human Rights and recognized in international human rights law in the International Covenant on Civil and Political Rights (ICCPR).

The right to speak against the bad policies of any government is an inalienable right, which no court of the land can take away

Okorocha and His Habits: Yes it is true (pt. 3)

A passionate urge to reduce cost of governance in Abia State