They are turning Biafra into a poor man’s dream!

I am privileged to live in the west.

I studied law as a first degree which includes international law in which I did my research project.

When my people ask me whether Biafra is possible, I’ve always answered NO.

They were often shocked and asked why. 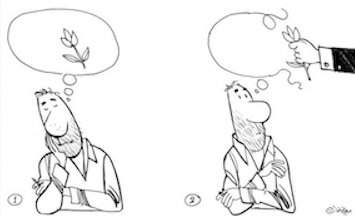 I explained that there are two ways a new nation is born today: the Yugoslavia way (By mutual agreement) or south Sudan way (War).

I asked them: do you think that Nigeria will willingly give you Biafra (by mutual agreement)?

So Biafra will only be possible through the south Sudan way.(War)

Are you ready to wage a 30 year war to actualize Biafra?

They asked: what if the United Nations intervened.

I then laughed and explained to them Article 2 of the UN Chatter. (The Organization is based on the principle of the sovereign equality of all its Members…Nothing contained in the present Charter shall authorize the United Nations to intervene in matters which are essentially within the domestic jurisdiction of any state)

I further explained that the international community only sidestep the said article 2 when you start a serious civil/violent conflict and millions start dying in such numbers that it shall be said to endanger international peace and security.

Next question: How are the world powers looking at the present agitations for Biafra?

Basically, non-interference in a matter deemed to be essentially within the domestic jurisdiction of the Nigeria federation.

Let me warn here, if – per an unlikely chance – the present agitation of Biafra leads to violent conflict, Nigeria will do to the Biafrans what Sri Lanka did to Tamil (in 2009) and the UN will turn a blind eye. (like they did to the genocide in Sri Lanka)

WHY? The international community is interested in keeping Nigeria ONE because any trouble in Nigeria will create a catastrophic refugee crisis in Africa that will simply overwhelm the West.

That is why the international community will always support a Strong Nigerian leader that could keep Nigeria together.

Why do you think the west despised and opposed weak President Goodluck Jonathan?

It is principally because the UK and US policy makers believed that by contesting the presidency after serving Yar’adua’s 4 year term against an unwritten PDP agreement to rotate the presidency between the north and the south, GEJ by his actions endangered Nigeria’s peace and stability.

Next question: Why do the western world always support the north against the South?

My brothers, you are powerless and weak!

JUST THINK; Biafrans have been agitating, demonstrating, SITTING AT HOME and/or protesting for years; no attention, no response from international community, personality or organisation, but once some few unrecognized imaginary Arewa youths posted a threat on social networks, everyone started reacting including United Nations and other world leaders. The whole of Nigeria started boiling such as never before in recent times.

One is a toothless Bulldog (civilized and peaceful), while the west knows that the other can bark as well as bite!

What are we really being naive about?

I was then asked on the other hand, don’t you think that BIAFRA will be the best for us than any other thing considering the fact that everything will belong to us as a sovereign nation?

Yes, Biafra may be better but my point above is that Biafra is not possible.

It cannot happen because Nigeria and the international community will NEVER allow Biafra.

Rather than allow Biafra, the west will do to Nigeria what they did to Iraq and Libya!

So to the present day Biafra agitators I will say: continue your agitation for Biafra because it will get to a point where the northern elites will get so scared they will agree to restructuring the federation.

IBB and OBJ are already flying the Igbo presidency kite.

Finally let me say this…..

The owners of Nigeria (the cabal) are wise.

If the agitation for Biafra becomes so intense they will seek to bribe Ndigbo with something.

The way they bribed the Yoruba with OBJ presidency after June 12, and bribed Niger Delta with GEJ presidency to quell militancy.

And that will be worse for Ndigbo because they will make one fool an Igbo President and the agitation for Biafra Will die.

One Igbo saboteur will become a president and build the second Niger Bridge…. Finish!

And if anyone makes kpim for Biafra, that Igbo president will do to them what the late Yar’adua did to Yusuf, but unlike Boko haram jihadists, no Igbo will afterwards become a suicide bomber.

What should Igbos be doing?

We should be positioning ourselves so that when that time comes… We will reject an Igbo presidency and insist on restructuring…That will be in the best interest of the South East and South South.

Yes, let us hold up Biafra as a Damocles sword on Nigeria!

Let’s not turn Biafra into a poor man’s dream. Let’s not be conned by another Ralph Uwazuruike.

Someone said we should retool Biafra, use it as a tool to get what we want: a restructured Nigeria that serves the interest of all. A truly FEDERAL republic.

Are we still shouting of marginalisation when a multi billion naira contract was given out from a bond proceed by the Erstwhile administration of Ikedi Ohakim of Imo state for the dredging of nwaorieubi river or so to a political contractor Tony Chukwu who pocketed the money and shared the much he could and today sponsors any government in power. Yet we cry of marginalisation.

There is no political leadership in the south East or any other zone that does not have his or her children schooling in abroad. Yet we elect them and our schools and hospitals are in shambles. Marginalisation indeed!

No one in Nigeria is marginalised. We are all collaborators in a zombie theatre being deceived and hoodwinked with rhetorics. We must rise up and demand good governance. We must be involved. Demonstrators went to protest against Senator Anyanwu of Owerri and his friends and relatives organised thugs to attack them. why? According to them,”he is our own”.

Query the non-performance of Rochas, and Orlu zone will tell you not to talk because he is their own.

At a public gathering at Abakiliki the other day, Gov. Umahi said he is for restructuring and against secession because his people of Ebonyi are marginalised in the south East and with secession they will be further decapitated.

I STAND WITH BOLA TINUBU

On May 29 Democracy Day, I support Tinubu’s latest call for Fiscal Federalism whereby states or regions would be semi-independent but pay taxes to the Central Government.

That has been the Jagaban’s mantra before APC came to power. His recent resurgence with the call for a new CHANGE is heartwarming.

Tinubu said that if Nigeria didn’t adopt his resurrected panacea of fiscal federalism that the country would make no progress.

I would love to propose that the willing Igbo communities in the South East be fused into a region and could be named Biafra (or whatever) under a confederacy of Nigeria.

Nigeria shall be greater if different peoples in the country pursue their priorities and growth choices and pay tax to the central government.

The central government I envisage shall be like ECOWAS in structure or form.