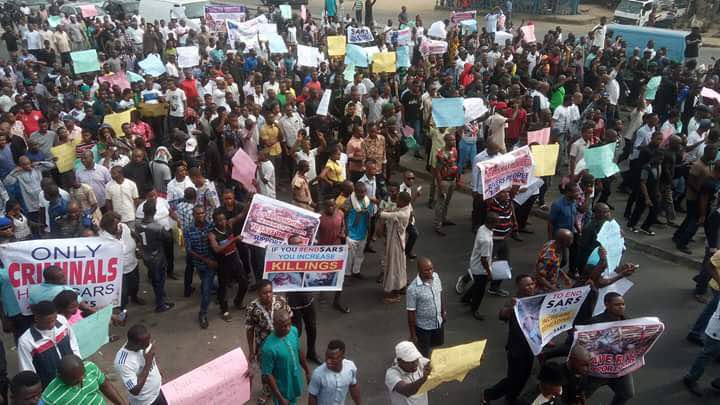 Over 5000 residents of Rivers state took to the streets of Port Harcourt to show Solidarity to the Nigerian Police and particularly for its embattled Special Anti-Robbery Squad SARS.

The sea of heads that marched from Polo Club on Tombia Street, GRA to Police headquarters, Forces Avenue in Port Harcourt carried several banners and placards with inscriptions such as:

“No to End SARS”, “SARS fighting criminals to see the state safe”, “SARS has reduced the mindless killings of Rivers people”, “if you end SARS you increase killings”, “to end SARS is to increase Beheading” “Governor Wike making criminals kings and attacking security agents.”

The ten kilometer walk culminated at the Headquarters of the Rivers State Police Command where leaders of the Solidarity Rally took turns to speak before handing over two copies of letters to the Inspector General of Police, Ibrahim Idris and the Rivers State Commissioner of Police Ahmed Zaki Ahmed respectively.

Receiving the letters, the Rivers CP said the police is ever ready to carry out its core mandate of protection of lives and properties, prevention of crime and the arrest and protection of offenders.

He said security should be everybody’s business because without there can be no peace.

“Security is next to life. If we want peace the police must be allowed to carry out their constitutional duties” he said.

The Rivers police boss said a review of the performance from January till date shows that SARS had been doing a good job.

“More than 1000 armed robbers have been arrested with 500 currently facing charges in the Court of Law.”

CP ZAKI also commended SARS for the large number of vehicles recovered from robbers and car snatches. He said within this period, several arms and ammunition have also been retrieved from criminals.

Most of us are victims

Honourable Asita Honourable, speaking with an emotion laden voice at the gate of the Rivers State Police Command told the Rivers CP and the press that most of the over 5000 people who took part in the solidarity rally have been affected directly or indirectly by the heinous crimes that enveloped the state since 2015.

“Most of us here are victims of robbery, kidnappers and hired assassins”

“several families in Rivers state have been slaughtered.”

He said the attack on SARS and other security agencies by the Rivers State Governor is because the security agencies have refused to be compromised. “The government of Rivers state has taken it as a duty to frustrate SARS”

“We understand that they have made several futile attempts to bribe SARS and to compromise the police that’s why Rivers people have come to say thank you and also to tell you to do more because without police this place will be hell.”

The former federal lawmaker and governorship running mate to Dr Dakuku Adol Peterside in the 2015 elections blamed Governor Wike for the rise in violent crimes in the state. He said all the security infrastructure put in place by the former administration tackle crime has been deliberately dismantled by the Wike Government.

“Now you can see that the governor of Rivers state is funding and supporting criminals. He is recognizing criminals as Chiefs and Kings and attacking security agencies.”

Asita said Rivers people have come to beg the police not to waiver in their fight against crime but rather do more for Rivers people in the area of security.

“It is only criminals that are afraid of Police. SARS goes after robbers hence only robbers and their sponsors will be fighting against SARS.”

Governor Wike is a direct sponsor, beneficiary and enhancer of criminality in Rivers state

The executive director of marine operations in the Nigerian Ports Authority, Dr Sokonte Davies who also spoke at the rally said SARS and other units of the Nigerian Police have done a good job in improving the security situation in the state. He said before now there are manifold evidence of daily murder and beheading in every local government area of the state.

“They are fighting against SARS because they want to continue beheading people to use for rituals. Only ritualists behead people”

Blaming Governor Wike for the violence in the state, the Kalabari born politician stated that “the Rivers State Governor is a direct sponsor, beneficiary and enhancer of criminality in the state.”

Speaking further, Dr Sokonte alleged that some group of people are working to get the CP transferred out of Rivers state because of his refusal to be compromised.

“Even if you don’t say it we know that they want you posted out. They are using Rivers funds to mount a campaign against SARS and other units of the police.”

Prince Tonye Princewill, former Labour Party governorship candidate in the 2015 elections who is now a chieftain of the APC wondered why Governor Wike didn’t call for the scrapping of SARS when his CSO was a Commander of SARS.

“We support the IGs pronouncement to reform SARS and to investigate the complaints from the public. Even SARS recognizes that every single complain must be Investigated.”

The crowd is a testimony of people support

Business mogul and chieftain of the APC, Chief Dumo Lulu-Briggs in his address to the crowd and the State CP said it is obvious that Rivers people are happy with SARS

“we have seen serious decrease in criminal activities in Rivers state and we want that to continue.”

“You can see the Mammoth crowds here, it is a testimony of support for the work that you are doing.”

He said those who have failed in their attempts to want to use SARS wrongfully will always complain.

We have suffered the most

The Chairman of the Rivers State chapter of the All Progressives Congress, Chief Davies Ikanya in his solidarity speech said the APC decided to identify with the rally because as a group that suffered the most loss in human and material terms the call by Gov Wike to end SARS gives them much concern.

“One day in ONELGA over 30 persons were killed and beheaded. the APC Chairman of ward 4 in ONELGA was killed alongside his pregnant wife, son and daughter in one day and we know that the sponsors of these crimes come from the PDP he alleged.

Chief Ikanya said the reason why the anti SARS campaign is loud in Rivers state is because they have plannedto invade the state with arms so as to resume the killings and Beheading ahead of the 2019 elections.

The leader of the Free Rivers Development Initiative, Chief Sampson Ngeribara said Rivers state has moved from its initial peaceful state to a level where human skulls are now used as decorative piece of art in the homes of people.

“I wonder what kind of leader will seat in the comfort of Government House sipping expensive cognac and watch a house in ONELGA saturated with human heads and then sleep fine.”