“Government should be serious in their policies and not be directionless in executing these policies.”- Senator Matthew Urhoghide.

“Let me thank Sen. Marafa and his colleagues for the painstaking work they have done in respect of this report.”- Deputy Senate President, Ike Ekweremadu.

“Distinguished Colleagues, I want us to note that we are coming to a closure on this as parliamentarians, I hope we can close the books in respect of that and think of the best way to deal with the subsidy issues.

“The factory aspect of it is what Senator Yusuf told us; the issue of subsidy is now a first line charge on oil drilling which is extremely dangerous.”

“I hope that the next Assembly will be able to sit with the Executive to address this issue and resolve it without creating unnecessary tension.”

“The NNPC needs to also caution themselves so that they do not encroach on the appropriation responsibility of the National Assembly.

“We need to do something about provisions of refineries in our country – it is not rocket science. Even if it does not resolve the issue of subsidy, we would have gone a long way in addressing it.” – Deputy Senate President, Ike Ekweremadu.

Ekweremadu then reads a letter from Mr. President on the confirmation of appointment of Honorable Justice Abbazih Musa Abubakar Sadeeq as the President Customary Court of Appeal , FCT, Abuja.

Senate Leader, Senator Ahmad Lawan cites Order 1(b) and states that because the Senate is sitting for close to the last time, normal processes for confirmation cannot be followed.

“I thereby suspend all our processes and dissolve into the Committee of the Whole to consider the appointment.”- Senator Ahmad Lawan.

Senate dissolves into the Committee of the Whole for the confirmation of Hon. Justice Abbazih Musa Abubakar Sadeeq as President Customary Court of Appeal , FCT, Abuja.

“I say to you that the Judiciary is the last hope for the common man and I have hope in you.”- Senator Shehu Sani.

“As a judge, I have known him for most of his adult life.”- Senator David Umaru.

Plenary is adjourned for an fifteen (15) minutes and the Senate would reconvene by 2:00pm.

Senator Binta Masi Garba moves for the approval of votes and proceedings I of Thursday, 30th May, 2019. Senator Foster Ogola seconds.

Senate Leader moves for adjournment after concluding all the items on the Order Paper. Minority Leader seconds.

Welcome to a new Legislative Day in the Senate of the Federal Republic of Nigeria!

Deputy Senate President, Ike Ekweremadu leads the Principal Officers into the chambers; takes the official prayers; and begins the day’s proceedings at 11:11am.

Senator Kabiru Gaya moves for the approval of votes and proceedings of Tuesday, 28th May 2019. Senator Sam Anyanwu seconds.

Senate now moves into the MOTIONS of the day.

-The Senate recall that the President C-in-C had signified the withholding of his assent on the Energy Commission Act (Amendment) Bill, 2019.

Senate dissolves into the Committee of the Whole for the consideration of the above Bill.

The Senate accordingly resolves to:

Rescinds it’s decision on the affected clauses of the Bill at the Committee of the Whole and the Bill is PASSED. 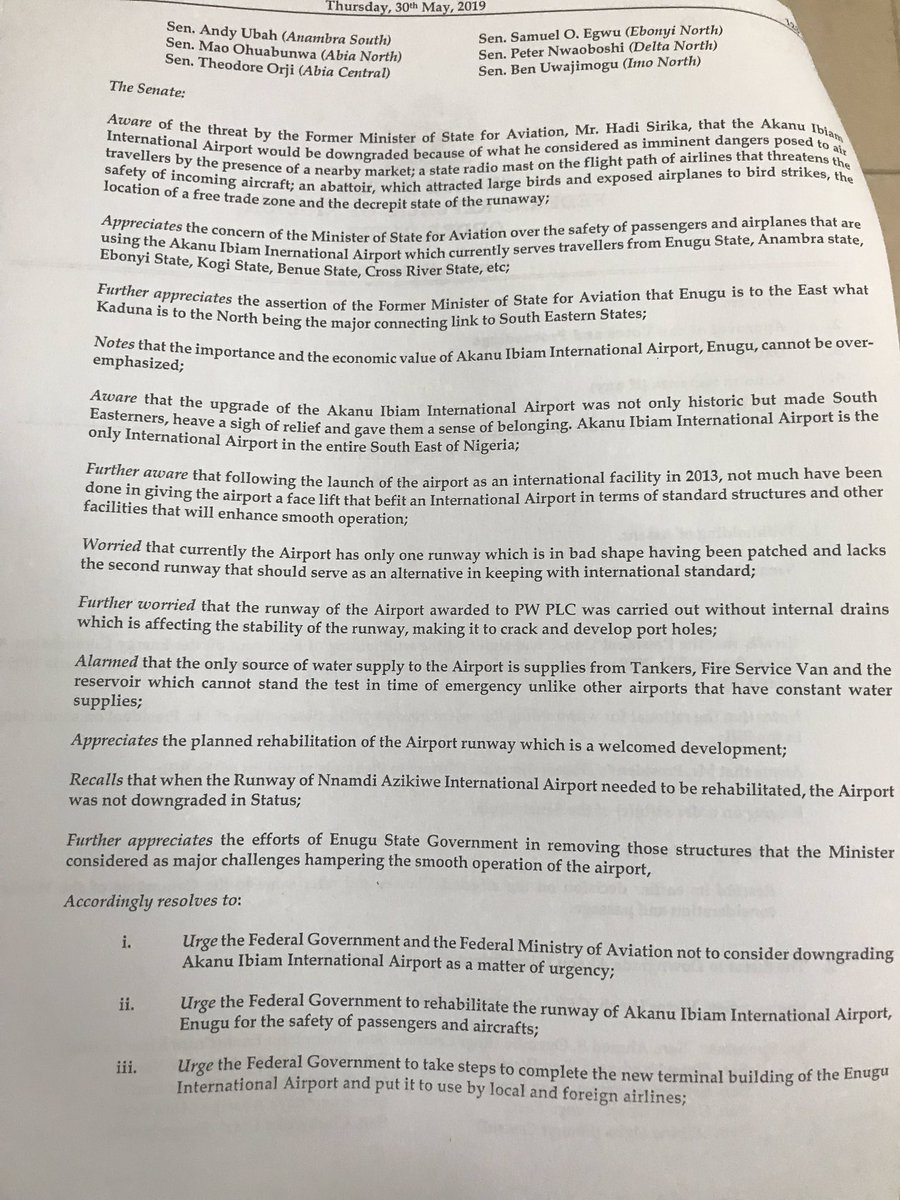 “ I really appreciate the fast response of the Minister for these past 4years. This airport is strategic in its location. I fully support this motion, the airport (Akanu Ibiam) should not be downgraded.”- Senator Shehu Sani.

“I rise to lend my voice to this critical motion. We must ensure that this airport is not downgraded.”-Senator Barnabas Gemade.

“I fully support this motion and I want us to know that Enugu is the center of the South East and I will recommend that a new standard Airport should be built.”- Senator Tayo Alasoadura.

“Let me thank everyone for our usual patriotism. The airport is not just for the people of Enugu, but for everyone, it is a universal issue and we must take it seriously.”- Deputy Senate President, Ike Ekweremadu.

“This matter has been on for a long time and every day we just keep our fingers crossed and pray nothing bad happens. I am happy the Senate has brought it up and this should be looked into by the government to repair the Enugu runway.”- Deputy Senate President, Ike Ekweremadu.

“As it stands now, flights do not land at night in Enugu. The Federal Government needs to look at the landing lights so that lives can be saved.”- Deputy Senate President, Ike Ekweremadu.

III. Urge the Federal Government to take steps to complete the new terminal building of the Enugu International Airport and put it to use by local and foreign airlines;

Senate moves into the Bill for Concurrence.

Senate dissolves into the Committee of the Whole for the clause by clause consideration of the Federal University of Education, Nsugbe (Est, etc) Bill, 2019.

Senate now moves into the consideration of reports.

-That the Senate do receive the reports of the Committee on Ethics, Privileges and Public Petitions in respect of:

Senator Jonah Jang seconds that the Senate do consider the report of the Committee on Ethics, Privileges and Public Petitions in respect to the above petitions.

a.That the decision of the Navy is sustained because the dismissal of Nze Fabian Okechukwu followed due process.

“Thank you Senator Sam Anyanwu for the report and your commitment in this Senate. Thank you for bringing the petitions with reasonable recommendations. I also thank the members of the Committee for the work well done.”- Deputy Senate President, Ike Ekweremadu.

Senator Barau Jibrin seconds that the Senate do consider the report of the Committee on Downstream Petroleum Sector on the Promissory Note Programme and a Bond Issuance to settle Inherited Local Debts and Contractual obligations to Petroleum Marketers.

“I submit totally to this initiative as this will add value to the Petroleum sector.”-Senator Bassey Akpan.

“It is very sad for the country that the crude that we use to drive our cars are not manufactured in Nigeria and the cash spent on this is outrageous.”-Senator Victor Umeh.

“If we continue to hope that one day this subsidy will end, we are deceiving ourselves. What would Nigerians face after this payment of arrears?”- Senator Victor Umeh.

“People in government have refused to face the problem. Everyone is depending on oil revenue and yet no functional refineries have been set in place.”- Senator Victor Umeh.

”Exchange rates are not the problem, but our inability to do what others are doing is the main issue.”- Senator Victor Umeh.