Welcome to a new Legislative Day in the Senate of the Federal Republic of Nigeria!
#TodayInSenatePlenary – 11:01 AM – 17 Oct 2018

Senate President, @bukolasaraki leads the Principal Officers into the chambers; takes the official prayers; and begins the day’s proceedings at 10:59am.

Senator Theodore Orji cites order 42 & 52 and speaks on the pipeline explosion in Abia State due to the negligence of duty by NNPC staff that led to the loss of 150 lives. The villagers had gone to scoop oil from the leakage as a means of livelihood when the explosion occurred.

“It’s very regrettable because people have refused to do their jobs. NNPC and DPR are supposed to do monitor these issues. Scooping oil should not be allowed. From the incident, it is clear the leakages were reported but those in charge ignored these reports.” -Sen. Victor Umeh.

“I want to say it was a gory site. I saw human lives charred like rats. This is due to the negligence of PPMC and DPR. We have lost premium on human lives. This calls for serious investigation. The committee on downstream should investigate this.”- Sen. Mao Ohuabunwa.

”It’s a pure case of negligence. We should set up an ad-hoc committee and the senate should send a delegation to commesorate with the people of Osisioma. They don’t just need relief material but medicament.”- Senator Mao Ohuabunwa.

“As we go into the prayers to look into how we can truly come up with resolutions, we need to show that lives do matter in this country and make this a very good example of that, I say this to those committees we’ve referred this to,…”- SP, @bukolasaraki

“…because from the presentations and those who have contributed, this is just clear negligence on the part of those who are responsible and could have prevented the loss of lives of 150 people who have died.”-Senate President, @bukolasaraki

“Those who will finally agree to look into this matter should treat it with the seriousness that it deserves. The Committee on Petroleum Resources and Police Affairs should perform a proper investigation and recommendation.”- SP, @bukolasaraki

”Let us have a report in 2weeks and also find out what the Federal Government is doing about it.”- Senate President, @bukolasaraki

Senate resolves to:
1. Order NEMA to send relief materials to the affected individuals.
2. Order depots to commence immediate repairs of the leakages.
3. Refer to the Committee on Petroleum Resources Downstream for proper investigation and recommendation.
4. Observe a minute silence for the repose of souls.
5. Senate should send a delegation to the Abia State Government and the community.
SP, @bukolasaraki reminds Senator Abu Ibrahim, Chairman, Senate Committee on Police Affairs to bring a proper report next week on the case of the death of ICRC worker, Hauwa Leman and corper, Anita Akapson.

Senator Magnus Abe cites Order 42.1 on the death of former senator Cyrus Nunieh from Rivers State on 18th August, 2018 at the age of 87.
#TodayInSenatePlenary
Senate resolves to:
1. Observe a minute’s silence in honor of the deceased and;
2. Send a delegation of the Senate to condole with the family.
Senator Bassey Akpan cites Order 43 and draws the attention of the Senate to the two divisional police headquarters burnt down by APC in Akwa Ibom which led to the cancellation of the primary elections.

Senator Ibrahim Gobir seconds that the Senate do receive the report of the Committee on Ethics, Privileges and Public Petitions.
The report is LAID.
#TodayInSenatePlenary

The report is LAID.

EXECUTIVE COMMUNICATION: Confirmation for appointment of the nomination of Olanikekun Olukoyede, Esq. as the secretary of the EFCC in accordance with the provision of section 2(3) of the Economic and Financial Crimes Commission (Est.) Act 2010.

Senator @Biodun_Olujimi seconds that the Senate do consider the request of Mr. President C-n-C on the confirmation for appointment of the nomination of Olanikekun Olukoyede, Esq. as the Secretary of the EFCC.
#TodayInSenatePlenary

Senate President @bukolasaraki refers the Executive Communication to the Committee on Anti-Corruption and Financial Crimes for further legislative action.

Senate now moves to the motion of the day. 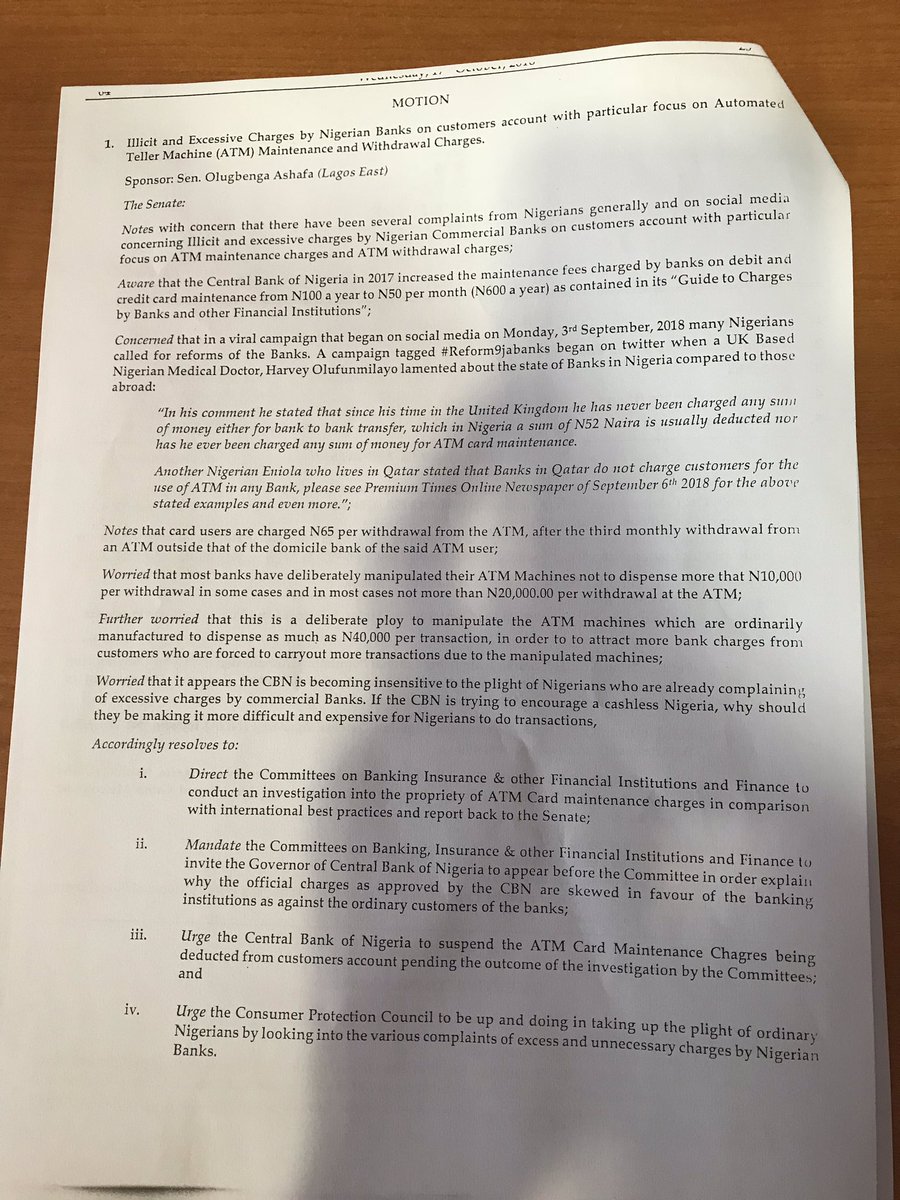 DSP, Ike Ekweremadu seconds the motion, “The ATM charge is not the only charge we get from the bank, there are VAT charges and so on; this is unacceptable. We have the Customer Protection Agency in Nigeria, but they are not living up to expectations.
“If we have Institutions in Nigeria, they should make sure to do their jobs to protect Nigerians. Banks should have recognizable charges to let customers know what they are up against.”-DSP, Ike Ekweremadu.

“It won’t be out of place to Institute a committee that will call on the CBN to tell us what these charges are about. The Senate by fiat should abolish charges if they can’t be verified.”- Senator Bala Na’allah.

“There’s no bank that makes profit on these ATM charges because the maintenance and breakdown of ATMs are so expensive, the payment for security also attracts these charges.”- Senator Gbolahan Dada.

“The monetary policy guidelines are not being adhered to and as such, the Committee on Banking and Finance should take charge of that.”-Senator Philip Gyunka.

“These banks should stop ripping Nigerians off their hard earned money.”-Senator Adeola Solomon.

“People do not understand that the cost of technology is high. If there is a problem with the ATM, you have to pay for someone to fix it. We cannot force it on the banks to reduce costs.”-Senator Ibrahim Gobir.

“The common man is also a victim. Banks declare profit and you wonder where it is coming from; it’s from the sweat of the common man. I want to add that we come up with a law that puts banks on their toes.”- Senator Emmanuel Bwacha.
“The Senate must take serious stand on this issue. Nigerians are really suffering. The bank system is not encouraging. I had an issue, took it to the bank and was refunded but how many Nigerians can do this? The issue needs to be addressed.”-Senator Kabiru Gaya.

“Banks have come up with other ways to make money and are declaring large profits. Because of certain limits, you make 10 transactions and you are charged for each. It is illegal. CBN should be called upon to review its actions on resolving these issues.”-Sen. Barnabas Gemade.

“This is a motion that touches on the lives of every Nigerian irrespective of what part you belong to or political affiliation you might have and that is why we are here, to always defend and protect the interest of our people.”-SP, @bukolasaraki

“We need to look at ways to ensure that our resolutions go beyond just the debates — so that whatever action we take will come into effect.”- Senate President, @bukolasaraki
“This Senate has done this many times before; when there was a hike in the mobile telecommunication data charges, we intervened and put an end to that. When there were discrepancies and increases in electricity prices, we also took action.”- Senate President, @bukolasaraki
“We have done this on a number of similar cases. I want us to take effective resolutions.
For me, this is a major step that we are taking. This is because I introduced the first ATM machine that came into Nigeria over 25-years ago.”-Senate President,
“Now, after 25-years, we should have grown out of these excessive charges and moved on. So, I believe this is something that we must address to create an environment that protects all Nigerians, because these kinds of charges in this economy affects everyone.”-SP, @bukolasaraki

4. Urge the Consumer Protection Council to be up and doing in taking up the plight of ordinary Nigerians by looking into the various complaints of excess and unnecessary charges by Nigerian Banks.

Senate now moves to the consideration of reports.
#TodayInSenatePlenary

1. Report of the Committee on Local and Foreign Debts by Senator Shehu Sani on:

Senator Gershom Bassey seconds that the Senate do consider the report of the Committee on Local and Foreign Debts on New External Capital raising of $2.786 Billion from the International Capital Market.
Senator @ShehuSani presents the report.
#TodayInSenatePlenary

“Let us ensure we carry out oversight functions to make sure these funds are used for their purpose in growing the country.”-Senate Leader, Ahmad La

“I thank the committee for their work. It is important we see to it that these monies are utilized.” -Deputy Senate President, Ike Ekweremadu

“The Committee on Finance should ensure the monies are released immediately.”-Senator Barau Jibrin.
Recommendations:
1. Senate approves the implementation of the new external capital raising of USD2.786 Billion from the International Capital Market approved in the 2018 appropriation Act.
2. That the Senate do approve the external capital raising of USD82.54Million to refinance the balance of USD500Million matured Eurobond in the International Capital Market.
3. That the Senate do approve the issuance of the above, but advise that the Federal Government do everything possible to limit its requests for external borrowing and source for other means of generating revenue internally. This is to avoid driving our country into debt.
4. Direct our various committees to carryout extensive oversight on the various MDAs to ensure that the previous loans that have been granted are properly utilised. This oversight should be fixed immediately.

2. Report of the Committee on Ethics, Privileges and Public Petitions on the screening of nominees for appointment as chairman and members of Code of Conduct Bureau (CCB)

“Hon. Ganiyu Hamzat and Dr. Vincent Nwanli failed to show up and present their credentials for the screening.”-Senator Sam Anyanwu.
Senate dissolves into the Committee of the Whole for the clause by clause consideration of the report on the Committee on Ethics, Privileges and Public Petitions on the screening of nominees for appointment as Chairman and members of Code of Conduct Bureau.

BREAKING: Today, the Nigerian Senate passed a resolution calling on the Central Bank of Nigeria (CBN) to suspend the ATM card maintenance charges being deducted from customers.

Dr. Muhammed Isah, is confirmed Chairman of Code of Conduct Bureau.
Murtala Kankia, Emmanuel E. Attah, Ubolo I. Okpanachi, Ken Madaki Alkali, Prof. S. F. Ogundare, Saad A. Abubakar are confirmed members of Code of Conduct Bureau (CCB)
“We hope that they will continue to play key roles in the Bureau and I wish them all a successful tenure.”- Senate President, @bukolasaraki

Senate now moves to the consideration of bills.
#TodayInSenatePlenary

“It is a very good bill. If there is planning and no implementation, it would be wrong. There should be a follow-up.”- Senator Ibrahim Gobir.

Senate President, @bukolasaraki refers the Bill to the Committee on National Planning to report back in in 4 weeks.

“I’m sure with this kind of bill we’ll provide an enabling environment for our people and also provide opportunities for young people to have such technical education that will support our industries and create employment., and going self to the civil service we’ll create a pool of self employed young men and women.”- Deputy Senate President, Ike Ekweremadu.”-DSP, Ike Ekweremadu.

Senate Leader moves that all other items on the order paper be stood down to another Legislative day. Minority Leader Seconds.

Gov Ikpeazu to Peter Obi: “We are proud to have you as our leader, ally and incoming Vice President”