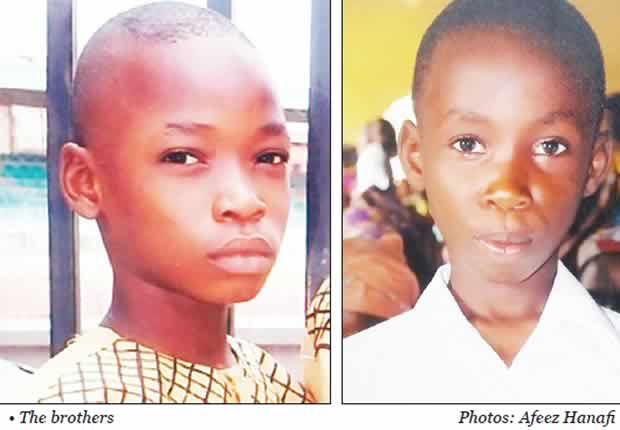 Two teenage schoolboys, Godspower and Marvellous Ebubechukwu were, over the weekend found drowned in a lagoon in Ibeshe, Ikorodu area of Lagos State

In the meantime, the father of the boys, Mr. Gabriel Ebubechukwu has insisted  that he suspects foul play.

According to Mr. Ebubechukwu, the corpses of his children were recovered naked but neither their shoes nor clothes were found on the shore.

He told PUNCH Metro on Monday that their friends might have lured them to the lagoon to swim.

The Ebubechukwu family lived on Blessing Estate in Ibeshe.

The kids were reported missing on Thursday shortly after they returned home from school – Keme Balogun Junior and Senior Secondary Schools around 3pm.

Their bodies were found floating on the water on Saturday by some security guards in the community and the matter reported to the police at the Ipakodo division.

Gabriel, a teacher, who spoke with our correspondent on behalf of the family, described the incident as devastating.

He said, “Nobody was at home when they came back from school on that day. They usually returned home around 3pm.

“When I got home at 4pm, they were nowhere to be found but their schoolbags and uniforms were on the floor.

“People joined me and my wife to search for them.

“When we couldn’t find them, we reported to the police at the Owode division but they told us to come back after 24 hours.

“We went back on Friday and were referred to the Ipakodo division.

“It was on Saturday morning that some security men came to our house and told me they found two bodies in the lagoon.

“On getting there, I discovered they were Marvellous and his brother, Godspower. They were naked.

“I guess they went to swim with their friends. They didn’t know how to swim.

“But we did not find their clothes around the river, which made me to suspect that there is more to it. I even thought they were abducted.”

Gabriel said he had been trying to calm the deceased’s two siblings and their mother, adding that he had taken solace in God.

A neighbour of the family, who identified himself only as Emmanuel, urged the police to investigate the remote cause of the incident.

He said, “The boys were intelligent and friendly. We used to joke a lot.

“In all our discussions, they never mentioned swimming as their hobby. That was why I was surprised when I heard they drowned.

“I want the police to do a thorough job on the case and find out what actually transpired.”

She said, “It was a case of missing children. Their corpses were recovered from the lagoon.

“Sources said they went to the river to bath while on their way from the school.

“However, the command is investigating the case to ascertain what actually happened.”