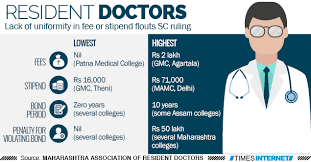 Members of the Association of Resident Doctors (ARD) at the University College Hospital, Ibadan, have suspended their five-day warning strike.

The doctors had on Wednesday commenced the strike to protest what they called insensitivity of the management to their plight and payment of half salaries to members. The doctors are demanding that the hospital management must respect agreements reached over full lateral implementation of skipping and payment of outstanding salaries.

A NAN correspondent, who visited the hospital on Friday, however, observed that full medical services were ongoing and resident doctors were sighted attending to patients. Dr Mashor Mbwas, the Public Relations Officer of the association, confirmed the suspension of the strike.

According to him, the industrial action was suspended following the intervention of some prominent Nigerians who prevailed on the management to make some commitments as regards the demands of the doctors.