Police corruption is to be investigated by a powerful committee of MPs amid fears of widespread impropriety – as The Independent reveals that thousands of officers are suspected to be crooked.

The Home Affairs Select Committee will launch an inquiry next month into the police’s relationship with organised crime, focusing on the infiltration of forces by criminal networks. The inquiry, which will allow MPs to hear from witnesses under the protection of parliamentary privilege, follows a series of scandals including the inquiries relating to Stephen Lawrence, Daniel Morgan, phone-hacking and Plebgate.

It comes as The Independent can reveal for the first time the Government’s official estimate of how many members of police staff were suspected of being compromised by dealings with criminals.

An analysis of intelligence by Home Office researchers found between 0.5 and 1 per cent of the 200,000 police officers and civilian employees in England and Wales in 2003 were “potentially corrupt”, and involved in leaking information to criminals, stealing property during raids, fabricating evidence, helping villains to escape prosecution and “using their power to obtain money or sexual favours from the public”.

However, the previously unnoticed report said the problem at the time was “far wider” and made clear the 2,000 figure did not include officers suspected of “criminality and misconduct”, which included dealing and using drugs ranging from steroids to crack cocaine, fraud, domestic violence and “sexist, racist and homophobic behaviour”. 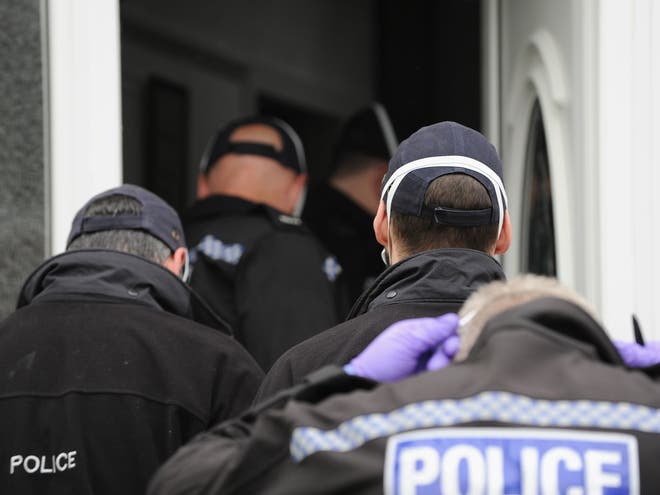 The report cited raids where suspects were apparently expecting police, had no incriminating evidence and had “already got the kettle on when the police arrive”.

One investigator is quoted as saying: “A good villain can’t operate without having a bent officer…it’s impossible.”

The report said the suspected criminality was not limited to junior officers and found “examples of higher-ranking officers implicated in corruption or other unethical behaviour”.

The Home Office report also recommended that, in some cases, police who had committed crimes should be dealt with behind closed doors, rather than mount prosecutions in open court, with “alternative outcomes” such as “disciplinary procedures” and “disruption tactics” being “less damaging to the morale of the organisation”.

Another theme running through the 2003 paper was the fear of “bad publicity and criticism” that resulted from publicising investigations into police corruption. “Media strategies accompanying investigations might be used to minimise negative publicity,” the report suggests.

Critics said this “kid-gloves” approach to the police from successive Labour governments was one of the reasons why the Home Secretary, Theresa May, is having to deal with a series of historical scandals, such as Hillsborough, the Daniel Morgan murder and corruption of the Stephen Lawrence investigation.

Conservative MP Lorraine Fullbrook, a member of the Home Affairs Select Committee, said: “Labour’s kid-gloves treatment of the police bred a lack of accountability which ultimately let down the public. There has been a loss of confidence in the police as a result, which is quite dangerous. Theresa is trying to tackle these historic issues to restore the public’s trust.”

Earlier this year, The Independent revealed the existence of a secret Scotland Yard report from 2002, code-named Operation Tiberius, which concluded there was “endemic corruption” in the Metropolitan Police.

The file found organised crime networks in north-east London were able to infiltrate the Met “at will” to frustrate the criminal justice system.

Following pressure from the Home Affairs Select Committee, Scotland Yard later admitted it held an astonishing 260 crates of documents on police criminality relating to Operation Tiberius – yet none of the rogue detectives appears to have been successfully prosecuted.

The separate 2003 Home Office report into police corruption was unearthed by The Independent after being buried in exhibits submitted to the Leveson inquiry.

The research found up to 1 per cent of the 200,000 police officers were “potentially corrupt”, but warned: “There is likely to be a far wider range of unethical behaviour within the police service that is not picked up.”

In one force, 15 per cent of all corrupt activity related to the disclosure of information to criminals, and 11 per cent to the “inappropriate association with criminals”.

It said Scotland Yard had a particular problem with the corruption of detectives by informants from the underworld. Prosecuting police officers is “particularly difficult”, according to the report. One investigator was quoted as saying: “Unlike a criminal, a corrupt officer knows exactly what can be deployed against him … they know how to cover their tracks.”

The report also found a systemic problem with officers sharing a “solidarity …that stands in the way of colleagues reporting on one another where corruption is evident”.

Policing minister Mike Penning said: “The public expect the police to act with honesty and integrity and it is right that the full force of criminal law is available to punish and deter acts of corruption by police officers. This Government has introduced a range of measures to tackle misconduct.”

See all the evidence INEC has a server for 2019 elections