The credibility of Saturday’s local government elections in Kano state is now in question.

The Independent National Electoral Commission, INEC, has dissociated itself from incidences of underage voting which was a prominent feature in the exercise.

“The attention of the Independent National Electoral Commission INEC has been drawn to videos and pictures purportedly showing some underaged thumb printing ballot papers in a recent election. These images have been circulating online since Saturday.

“The Commission wishes to inform the public that the images do not relate in any way to any election organised, conducted or superintended by INEC. As far as the Commission can ascertain, they relate to a Local Government election conducted at the weekend, and over which we have no legal control or responsibility whatsoever”, said Oluwole Osaze Uzzi, the commission’s Director, Voter Education and Publicity.

There had been concerns by some election observers that while underage voters may have been used to boost the 2015 election outcome in the state, the incident might repeat itself in 2019 if Saturday’s occurrence is not questioned.

“while the Commission remains resolute in our commitment to sanitize the nation’s electoral process and deliver free, fair and credible elections, we cannot be held directly or vicariously liable for an exercise outside our legal purview.

“It should be pointed out here that Local Government elections are exclusively the constitutional responsibility of the respective State Electoral Commissions, who are in no way under the control or supervision of INEC.

“On our part, INEC assures the public that we are doing all we can to ensure a credible election as was once again demonstrated in the Mashi/Dutsi Federal Constituency election in Katsina State on Saturday.

“With regard to the ongoing Continuous Voter Registration CVR exercise, the Commission is not unaware of challenges some citizens have encountered in trying to get registered at some of the centres.

“Steps have been taken to ameliorate these, including the deployment of additional Direct Data Capture (DDC) machines for registration, with the more populated centres getting priority attention.

“In addition, the number of registration centres have been increased to 1,446 nationwide. While thanking Nigerians for their patience and understanding, we believe that with the measures taken so far, the queues and other identified challenges will soon abate.

“We once again appeal to those who registered in the previous exercises not to do so again.

“This is not a fresh registration exercise but an opportunity for those who turned 18 years and those who didn’t register in the past to register as voters”. 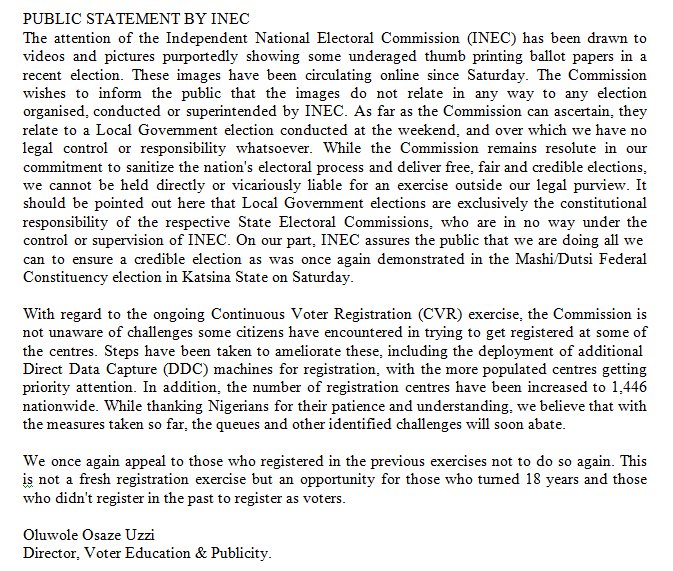 Patience Jonathan begs EFCC to settle out of court

Herdsmen attack: ‘President Buhari is in a trance’ – Soyinka