United Nations Is Leading The World Back To The Cave — Intersociety 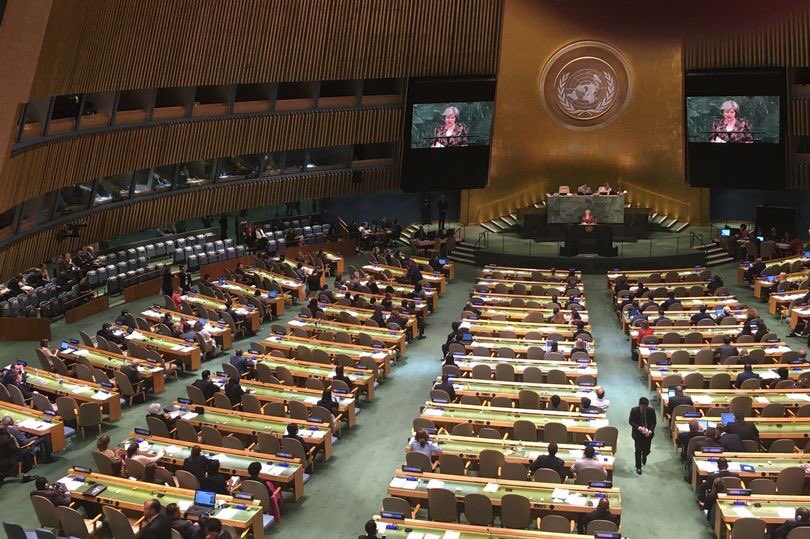 From every irrefutable indication, the United Nations which is presently in its 72nd Annual General Assembly session; lasting from 19th to 25th September 2017,  is leading the entire global community back to the cave.

The 193-member world body has nothing concrete to show for 72years of its existence. At 72, it has wobbled and fumbled deeper instead of rising to its global duties and challenges.

Disheartening, also, is the fact that the world body has totally lost control and allowed to slip off its sleeve pockets of achievements especially those it managed to record in the 1990s and early 2000s.

Signs of better future and vibrancy on the part of the world body were so bright and strong especially in the 1990s that the then President of the Union of Tanganyika and Zanzibar (Tanzania), Dr Julius Nyerere scolded his fellow African leaders and sarcastically asked them as follows: why is it that when Europeans, Americans and Southeast Asians are busy finding their ways to the moon; Africans are busy heading back to the cave?

In response, Africa then through “wind of changes” managed to move from military coups and one party civilian dictatorship to multi-party democracy with some stability; leading to change of its premier organ from OAU to AU on 9th July 2002 with some promising reforms; which have now been reversed to return the Continent to its present era of renewed dictatorship, hopelessness, mass poverty, chronic diseases, teething  hunger and poverty, malnutrition, rabid government corruption, political turmoil, militarization and militancy; under-development,  state terrorism, citizens’ violence, immeasurable abuses of human rights and the abuse of power and office by public office holders of its 54 member-States.

These “signs of hope” and “wind of changes” also propelled democratic revolutions and end to military dictatorship and political turmoil in South American Continent and the Caribbean.

Today, the UN has totally lost control of its global leadership and the entire global world is turned around by same to be headed back to the cave.

Since the end of the Roman Empire civil war in 1648, efforts had been made to put in place an international umbrella body capable of effectively policing the world, administering the global affairs, checkmating dictatorship and protecting global and municipal citizens from regime atrocities and non-state actor heinous crimes; all for the overall purpose of ensuring international peace and security, respect for human rights, institutionalization of democracy and civil governance; human development, protection of global environment (atmosphere, lithosphere, biosphere and hydrosphere), etc.

To ensure these, the Holy Alliance through Peace of Westphalia was formed in 1648 following the brutal Roman Empire Civil War (1618-1648).

The Concert of Europe was replaced by the League of Nations, officially founded on 20th January 1920 in Paris (France) through the Treaty of Versailles  or Paris Peace Conference; which lasted until April 1946 when it was officially disbanded; giving room for birth of the present United Nations.

The United Nations was coined by then United States President Franklin D. Roosevelt and was first used in the Declaration by United Nations of 1 January 1942, during the Second World War, when representatives of 26 nations pledged their Governments’ commitment to continue fighting together against the Axis Powers (Germany, Italy and Japan).

The United Nations (UN) is an intergovernmental organization tasked to promote international co-operation and to create and maintain international order.

A replacement for the League of Nations, the organization was officially established on 24 October 1945 after World War II in order to prevent another such conflict.

At its founding in 1945, the UN had 51 member states; there are now 193-member States of UN and 64 non self-governing territories around the world.

The headquarters of the UN is in Manhattan, New York City, and is subject to extraterritoriality. Further main offices are situated in Geneva (Switzerland), Nairobi (Kenya) and Vienna (Austria). The organization is financed by assessed and voluntary contributions from its member states.

The UN Charter was drafted at a conference between April–June 1945 in San Francisco, and was signed on 26 June 1945 at the conclusion of the conference; this charter took effect 24 October 1945 when the UN formally began operation.

The UN’s mission to preserve world peace was complicated in its early decades by the Cold War between the US and Soviet Union and their respective allies. The organization participated in major actions in Korea and the Congo, as well as approving the creation of the state of Israel in 1947.

The organization’s membership grew significantly to 170 following widespread decolonization in the 1960s, and further increased to 190 in 1990s as a result of the end of cold war and collapse of Soviet Union and Yugoslavia.

It got three additional members in the 2000s following successful conduct of referendum in post war Ethiopia and Sudan and non-formal war Indonesia; producing new Republics of Eretria, South Sudan and East Timor.

The UN has six principal organs: the General Assembly (the main deliberative assembly); the Security Council (for deciding certain resolutions for peace and security); the Economic and Social Council (ECOSOC; for promoting international economic and social co-operation and development); the Secretariat (for providing studies, information, and facilities needed by the UN); the International Court of Justice (the primary judicial organ); and the UN Trusteeship Council (inactive since 1994).

The UN’s most prominent officer is the Secretary-General, an office presently held by Portuguese António Guterres since 2017. Non-governmental organizations may be granted consultative status with ECOSOC and other agencies to participate in the UN’s work.

After the end of the Cold War in 1991, the UN took on major military and peacekeeping missions across the world with varying degrees of success. It was in recognition of this that the organization won the Nobel Peace Prize in 2001, and a number of its officers and agencies have also been awarded the prize.

The United Nations has also since 1946 maintained a list of Non-Self-Governing Territories (NSGTs); which is a list of places that the United Nations General Assembly deems to be “non-self-governing” and subject to the decolonization process.

The number of such NSGTs around the world is presently put at 64.

Since 1946, the General Assembly has maintained a list of non-self-governing territories under member states’ control.

Today, under the watchful eyes of the United Nations, the world is not only terminally sick and endangered but also haunted by numerous monsters of uncontrollable proportions such as mental militarization ( reckless and widespread use of violence to solve social problems), physical militarization, insecurity, under-development, hunger, mass poverty, illiteracy, institutional grafts, regime failure and collapse; threats of nuclear holocaust, ethno-religious radicalism, threats of genocide and others forms of complex humanitarian crises; to name but a few.

As a matter of fact, the UN is leading the entire world back to the Hobbesian era where human lives and human living were short, nasty, brutish, cannibalistic and Ape jungle.

The colossal failure of the present world body has led to spiral increases in municipal governments’ aggressions and violence against their populations as well as their breaches of municipal compatible laws and international law and order.

The level of municipal impunity has risen to an apogee. Licit and illicit arms trade and shipment to the Southern world is uncontrollably alarming.

Politics of power game and balance of power and mutual destruction has taken over the world and made resolution of  world’s most dangerous conflicts such as Syrian violent conflict of 2011-to-date intractable while the UN sits by and watches impotently.

Dictatorship and its allied corruption and abuse of power especially in Africa has thickened and forced emergence of alarming number of armed resistance from the aggrieved, disillusioned and provoked non State entities and their actors.

Under the watchful eyes of the present UN and its leadership and in this ICT age, sit-tight leaders and regime atrocities/heinous crimes’ committers especially from Africa are still allowed to attend and address the UN General Assembly as well as to remain in office.

The idea of forming the United Nations was promisingly and futuristically conceived by then world great leaders and thinkers such as Chiang Kai-shek, a Chinese political and military leader who served as the leader of the Republic of China (presently renamed Taiwan) until 1975; Joseph Stalin (then Soviet Union); Charles André Joseph Marie de Gaulle (France), Wilson Churchill (UK) and Franklin D. Roosevelt (USA).

The dreams and aspirations of then former President Woodrow Wilson of USA contained in his famous pre League of Nations’ 14-Point Program of February 1918 were also captured.

Moved and shocked by the fact that: 14,500 wars were waged in the past 5000years with only 300years of peace; these leaders and thinkers went into their mental libraries and laboratories and came up with the idea of finding a globally acceptable neutral third party capable of galvanizing, congregating and aggregating the global world for peace, human rights and development.

In the UN Charter contains: saving succeeding generations from the scourge of war which twice in our lifetime has brought untold sorrow to mankind.

Today, UN has not only failed woefully in this respect but also darkened the future of the succeeded and succeeding generations. In the 2nd World War (1939-1945), 35million civilians including women and children and 15million combatants were killed.

Since 1945 when UN took over the world leadership, the number of people killed, maimed, tortured, disappeared, starved, impoverished and displaced is too shocking, alarming and deafening to mention.

So disheartening and disbelieving it is that the presently composed UN has made itself a globally laughing stock and caused the founding fathers of the global body and icons of peace such as Alfred Nobel to shed uncontrollable tears in their hallowed graves.

The UN has tainted and corrupted its awarded Nobel Peace Prize of 2001; just as the former Myanmar’s globally respected rights activist and Nobel Peace Prize winner-Ms Daw Aung San Suu Kyi who is now the “State Counselor” (Prime Minister) has also soiled and tainted hers over her brazen complicity in the persecution of Muslims of  the Rohingya; the same way the Islamist President of Nigeria is presently persecuting mostly Christian populated Igbo Indigenous People of Nigeria where his security forces have killed over 400 defenseless nationals since August 2015 and maimed over 500 others.

Int’l Society for Civil Liberties & the Rule of Law