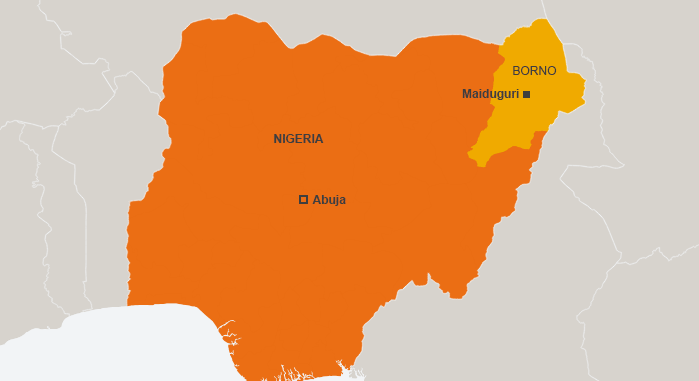 Latest information indicates up to 28 people were killed in a suicide bombing at a mosque in Maiduguri, northeast Nigeria, on Friday, raising fresh security concerns after a wave of similar attacks.

Umar Sani, a civilian vigilante assisting the military in the counter-insurgency, and local resident Musa Sheriff both told AFP there were two blasts at the mosque.

“People from various mosques nearby rushed to the scene to assist the victims,” said Sani. I was involved in the evacuation. We counted 28 dead bodies apart from the two bombers, who were identifiable by the mutilation of their bodies. Over 20 other people were injured.”

Sheriff, who said he escaped with his life as he was late for prayers, gave a similar account.

Both men also said two other people were arrested and handed over to the military for questioning after they were seen apparently celebrating following the blasts. The two men were “standing from afar, hugging each other like a celebration, chanting “Allahu Akbar” (God is greatest)”, said Sani.

“The rescuers apprehended them. They used ropes to tie them and they confirmed that two of their comrades carried out the attacks. They were unrepentant,” he added. To them it was a mission accomplished,” said Sheriff.

The attack happened shortly after 5:00 am (0400 GMT) in the Jidari area of the Borno state capital, which has previously been targeted by Boko Haram militants.

Maiduguri has now been hit six times this month, killing a total of 76 people, according to an AFP tally, underscoring an increased risk to civilians after similar strikes in neighbouring states and near the capital, Abuja.

According to the National Emergency Management Agency (NEMA), at least 17 other people were injured and taken to hospital after the blast at a mosque during early morning prayers.

NEMA said the latest strike “was carried out by a suspected lone suicide bomber whose two accomplices escaped, when some vigilant members of the community accosted them”.

The attack was the sixth time within the month of October that Maiduguri has been hit by suicide bombers, underscoring concerns about the safety of civilians from Boko Haram Islamists.

On October 1, a wave of suicide and bomb attacks left 10 dead in the Ajilari Cross area of the city, which was hit again on October 13, killing four.

On October 15, two suicide bombers hit a mosque in Molai, on the outskirts of Maiduguri, killing 30.

Last weekend, soldiers foiled a suspected suicide bomb attack at the city’s main army base, shooting dead a woman who failed to stop at a checkpoint.

Friday’s attack fits into a grim pattern of targeting places of worship and the use of multiple bombers to maximise civilian casualties.

NEMA said the latest strike “was carried out by a suspected lone suicide bomber whose two accomplices escaped, when some vigilant members of the community accosted them”.

It was not immediately clear if the accomplices were also carrying explosives.

A bomb blast has occurred in a mosque in Maiduguri, the Borno State capital, killing about 19 persons including the suicide bomber and leaving several others injured.

A suicide bombing during dawn prayers at a mosque in the state capital Maiduguri killed at least 10 people, a hospital source said.

Abdulkadir Ibrahim, spokesman of the National relief agency, put the death toll at 6. Another hospital source said 11 people had been wounded.

No one has claimed responsibility for the attacks but Ibrahim blamed the jihadi movement, which has been trying to carve out a state in the northeast of Africa’s most populous country since 2009.

Nigeria: “The Gods are not to blame”