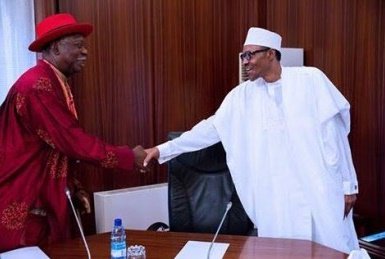 Critical Stakeholders in the Oil Producing areas under the auspices of Pan Niger Delta Forum have resolved to do everything within their powers to end the spate of Militant agitation in the area, so as to enable the Buhari administration pull the nation’s economy out of recession.

After a crucial meeting with President Muhammadu Buhari, members of the Forum led by King Alfred Diete Spiff and Chief Edwin Clerk strongly condemn all forms of criminality especially the vandalism of valuable national assets which destroys their environment.

The meeting was the first formal engagement between President Buhari and the Niger Delta leaders aimed at finding peace and stability in the area for sustainable economic growth in the country.

Sixteen broad dialogue issues were tabled at the meeting which the people described as quick wins towards the restoration of hope and confidence in the region.

President Muhammadu Buhari is presently locked in a crucial meeting with Niger Delta Stakeholders in Presidential Villa in Abuja.

The meeting is aimed at finding lasting solutions to the crises in the oil producing areas.

The meeting is being attended by Governors and Ministers from the south-south region, Traditional rulers as well as prominent indigenes of the Niger Delta.

Also chairmen of relevant committees of the National Assembly, service chiefs, Inspector General of Police and other political appointees from the South-south are in attendance.

The meeting is the first formal engagement between the President and people of the Niger Delta region.

It is expected critically to analyze all contending issues and come up with a robust plan for lasting peace, stability in the region as well as sustainable economic growth in the country.

President Buhari had recently maintained that despite prevailing challenges, oil and gas produced in the South-south remains critical to the Nigerian economy of today and the future.

According to Buhari, it as well is the most immediate and practical keys out of the present economic crisis.

The Senate on Tuesday [the complete updates]