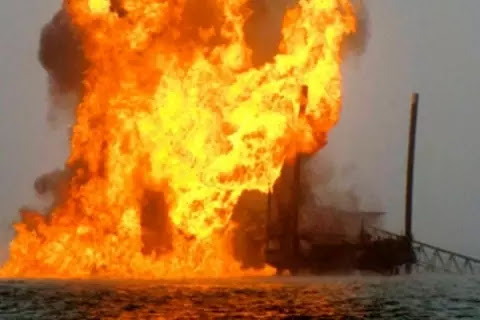 The incident took place in the early hours of Tuesday, September 13, 2016.

The dare-devil militants carried out the dastardly act in spite of the presence of a plethora of armed personnels swarming the Niger delta as a result of the ongoing “Operation Crocodile Smile”.

The militants NDGJM, in a statement, said:

“The Niger Delta is not a conquered territory and our people have never succumbed to intimidation before, rather we match force with the oppressor’s brutality.

“The Nigerian government should already know that the people of these parts are not fools, who will not be able to see when they are being treated with disdain.

“The high command of the Niger Delta Greenland Justice Mandate, once again says to the deceptive and untrustworthy Nigerian government and its cowardly armed forces that our people shall not deal with you on your terms, but on mutually agreed terms.

“Until you drop this deceptive and master/servant poise, Operation Crocodile Tears shall persist.

“As a mark of our decision to totally ground the Nigerian oil economy, the gallant “OPUDO” strike forces brought down the Afiesere-Iwhrenene major delivery line in Ughelli North, leading to the UPS/UQCC operated by NPDC/Shorelines at 1a.m., today (yesterday).”

Yesterday’s attack came nine days after it warned residents living around marked major oil and gas facilities in the Niger Delta to vacate such areas and threatened to detonate explosives at strategic points in the region.

The militant group added:  “Our patience is running out on our people living close to major oil and gas facilities in the upland areas of our region.

“The more critical assets of the oil sector are still alive because we are being careful not to hurt our people.

“For the last time, leave these areas if you live around them and if you love your lives.”

In another development, spokesperson of NDA, self-styled Brig-Gen Mudoch Agbinibo, in series of picture tweets on his Twitter handle, gave reasons for the death of personnel of the Nigerian Army during the military’s Operation Crocodile Smile in parts of the Niger Delta region.

NDA said: “They are scared to death because they cannot swim, so they drown all the time.

In a picture tweet showing four armed soldiers with a paddler in a wooden boat, the group said:

“With the millions put into the Operation Crocodile Smile exercise, see the dead boats given to them to fight militants.

“The only thing the soldiers are good at is harassment of old men, women and innocent youths of the Niger Delta.”

“The continuous deployment of troops, fighter jets and gun boats under the code name “Operation Crocodile Smile”, despite the ensuing truce by militants is meant to intimidate Niger Delta people to abandon their demands for their right of ownership of oil funds in the country.

“But it will end up in fiasco as no amount of intimidation, humiliation and harassment will stop the genuine struggle in the region except drastic steps are taken to address it.

“Buhari should stop forcing the Niger Delta to continuously remain in a forced marriage.

“Nigeria does not need a forced marriage because divorce will be the answer to such union, no matter the delay.

We can never be deterred by the overwhelming security presence in the Niger Delta to abandon the struggle for true federalism and restructuring.”