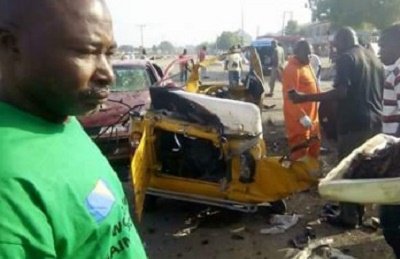 No fewer than eight people were killed in Twin bomb blast that occurred in early hour of Saturday morning in Maiduguri, Borno State.

Scene of the explosion (Photo: NEMA)

The twin blast occurred less than 24 hours when Nigerian military said Nigerians can now celebrate because Boko Haram has been defeated.

Spokesman of Defence Headquarter, Rabe Abubakar, had said the insurgents had been “totally degraded, decimated and 100 per cent defeated.”

The first blast went off at about 7a.m. at a coffee drinking spot near the Bakassi IDP camp, along the popular Maiduguri-Biu road.

Shortly after that, at about 7.35a.m., another blast went off in a tricycle near the NNPC fuel depot along Damboa Road, killing a woman and the rider.

Nine (9) persons lost their lives with twenty-four (24) persons injured and evacuated to various Hospitals from the two scene of the explosion in Maiduguri, in the early hours of Saturday.

The first incident of the explosion occurred at the entrance to Bakassi IDPs and the second at NNPC station along Damboa road in Maiduguri.

The Nigerian Army and NEMA officials confirmed the deaths the nine persons in  the twin blasts.

“At about 7.05 a.m. this morning, there were twin simultaneous suicide bomb explosions at the entrance of Bakassi Internally Displaced Persons (IDPs) camp and NNPC Mega Filling Station, Damboa Road, Maiduguri.

“At the Bakassi IDPs camp, a suspected female suicide bomber ran into a group of men and women at the entrance while they were coming out of the camp, killing 5 men and injuring 11 women.

“The bodies of the dead men and the injured women have been evacuated.

“At the NNPC, a female suicide bomber followed a fuel tanker in Keke NAPEP tricycle with the sole aim of gaining entry to cause maximum damage and casualty but was prevented from gaining access to the station by another vehicle.”

According to him, the suicide bomber exploded killing the three occupants of the tricycle with no report of injuries.

He said that the Acting General Officer Commanding (GOC), Brig.-Gen. Victor Ezugwu had already visited the scene to get first class information.

“The Acting GOC 7 Division has already visited the place and appealed to the people to be calm as concerted efforts were on to ensure the safety of lives and property.

“Troops and security agencies have been mobilised and the injured have been evacuated while efforts are ongoing to comb the general area as well as entries and exits of Maiduguri.”

“While we commiserate with the families of the late victims of this cruel act and wish those who were injured speedy recovery, we would like to assure the public that efforts are ongoing to track those behind the dastardly acts.

“However, it is equally important to reiterate the need for more vigilance and security consciousness among all. Citizens are enjoined to report any suspicious persons or movements to the security agencies,” he said.

Meanwhile, the National Emergency Management Agency (NEMA), in a statement, has also confirmed the killing of nine persons in the blasts.

NEMA spokesman Sani Datti said nine persons were killed and 24 persons injured and evacuated to various hospitals from the explosion scenes in Maiduguri.