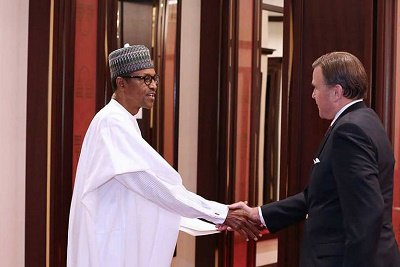 U.S. Ambassador to the Federal Republic of Nigeria Honorable W. Stuart Symington presented his credentials to His Excellency, President Muhammadu Buhari on Thursday at a brief ceremony at the Presidential Villa in Abuja, Nigeria.

The U.S. Senate confirmed Ambassador Symington on September 28, 2016 after he was nominated by U.S. President Barack Obama, then sworn in as the Ambassador to the Federal Republic of Nigeria on October 31, 2016.

Ambassador Symington, a career member of the Senior Foreign Service, class of Minister-Counselor, was raised in Missouri and comes from a distinguished political family.

His father, James W. Symington served in the U.S. House of Representatives from 1969 to 1977, representing Missouri’s Second Congressional District.

Symington earned a bachelor’s degree from Brown University, and a Juris Doctorate from Columbia University.

He clerked for the Chief Judge of the Eastern District of Missouri, then litigated and practiced corporate law in New York, London, Paris, and St. Joseph, Missouri, before becoming a Foreign Service Officer in 1986.

He has represented the United States in Honduras, Spain, Mexico, Ecuador, Niger, Iraq, and several important positions in Washington, in addition to an assignment as the Foreign Policy Advisor to the Commander, North American Aerospace Command and U.S. Northern Command.

Most recently, he was the Deputy Assistant Secretary of State for Central Africa and African Security Affairs before being nominated to his current position.

The Ambassador has received numerous Department of State awards and speaks French and Spanish.

Ambassador Symington and his wife, Susan, have two children.

Undying hope: the promise of sunrise – by Olugu Olugu Orji