The US has topped the list of nations with the most coronavirus cases, as the number of the infected within the country crept past 82,000 cases, according to the data compiled by Johns Hopkins University.

The grim milestone was achieved on Thursday, according to data compiled by Johns Hopkins University, which puts the US at 82,404 cases of the virus, surpassing Italy at 80,589 and China at 81,782.

With 150 new fatalities reported so far on Thursday alone, Covid-19 has killed a total of 1,177 Americans to date.Thursday also saw cases worldwide soar beyond half a million, with more than 525,000 infections reported around the globe. 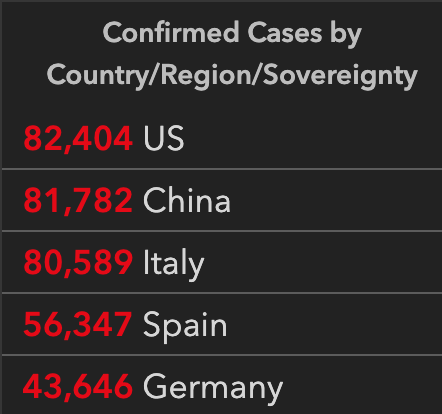 US President Donald Trump, when asked about the new tally, said the uptick in cases was “a tribute to our testing,” suggesting ramped up screenings for the virus throughout the country had driven the surge in newly confirmed infections.

The president also sounded skepticism over figures provided by China, where the outbreak originated, stating “I’m sure you’re not able to tell what China’s testing and not testing.”