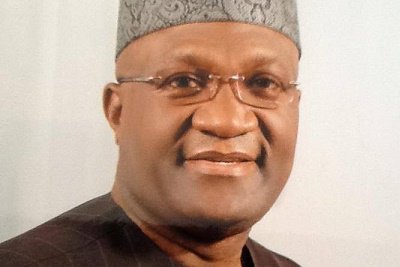 John Nnia Nwodo emerged into political prominence late 1983 at age 29, as the Nigerian Minister of Aviation.  The youth of the dashing Minister was not lost on anybody.

That position was as short-lived as the Shagari/Ekwueme 2nd term. John Nnia Nwodo had however been launched into the limelight. He would embrace same.

When then Maj. General Muhammadu Buhari Interceded in 1984, Nnia Nwodo would proceed to study Law at the famous London School of Economics, graduating in 1987.

He would venture into private Law practice after, lurking in power corridors until whipped out again in 1998, by the General Abdulsalami regime as the Federal Minister of Information and Culture.

At the beginning of the 4th Republic, Nnia would emerge with the All Nigeria Peoples Party (ANPP), aligning with the Dr. Chuba Okadigbo ANPP Vice-Presidential effort in 2003.

He was Tear-gassed with the then ANPP Vice-Presidential candidate during a political rally. Okadigbo would pass on from the event.

Nnia Nwodo would soldier on. But the event left an indelible impression on Nwodo’s mind.

He would learn to bide his time in picking his political spots, as he now understood that he was the best advocate and representative for his consistent beliefs.

He would not be one to be made over easily.

That conviction and no-holds-barred approach was on display at the 2004 World Igbo Congress (WIC), in Tennessee, USA.

It was an apolitical Nwodo who pointedly asked the political wayfarers who’d thronged the venue, to actually tell the Igbo what the true mission of the gathering was.

He pointedly surmised to the organizers what his then wife – May Her Soul Rest in Peace, had asked him, when he told her he was going to another Igbo Convention Overseas.

His late wife had asked: “…This money we keep spending travelling abroad for this yearly convention, can’t we use it to build a boy’s quarter?”, frankly telling all that he was not on a state or politically sponsored jamboree.

But had come to the event from his purse, and out of deep personal concern for a platform for Ndi Igbo on any myriad of Nigerian national issues – political, social, educational, trade, economics – any platform!

He had really come to join others at the venue in charting a meaningful discourse for the Igbo across the world.

During the convention, a then Governor of one of the South-Eastern States, boasted how it was in the best interest of the Igbo to join the PDP, as the party was poised to rule Nigeria for the Next 60 years.

Nnia Nwodo would pointedly ask the bigwigs to tell themselves some political truth, if they were to make any headway with the traditional Igbo.

Nwodo pointedly asked fellow attendees predominantly of the PDP sitting at the high table with him, “Who here, will honestly say that APGA did not win the 2003 Anambra State Governorship Elections?”

A succinct remark that brought a loud applause to the Convention Hall.

Nobody and none of the bigwigs, including the then Governor Chris Ngige entourage replied. That was the power of the man who could boldly say it the way it was.

Nwodo’s new presentation offers him the unenviable job of whipping the Igbo political class into line, regarding a unified presentation for the Igbo on issues of ethnic and Nigerian national importance, and results from same.

At the APGA Think-Tank Nigeria, it is our opinion that Nwodo’s articulations since his election holds promise for the Igbo.

He has served Igbo issues on a platter to all. Hiding nothing, and putting all – Friend and foe, on notice.

He has also offered a wide berth to embrace any and all relevant viewpoints to help attain the Ohanaeze mission.

His offering to include the Igbo Intelligentsia, including Governors, Editors and others, in the Ime-Obi of the Ohanaeze is a welcome development.

Nobody will say they were not consulted, or could not contribute. And we will readily know who leaked confidence, or is against the decision of the Umunna.

The Igbos are at political crossroads, and require an audacious voice to lead and speak for it in National affairs.  The Igbo are counting on Nnia Nwodo’s reach.

Presently, The Igbo stake in the Nigerian political sphere floats, as Igbo sons and daughters have difficulty keeping faith with any political dispensation.

Their political beliefs seem unrooted with any ideological alignment or political focus. Unfortunate!

The Ohanaeze Ndigbo President would not shy away from the lack of an articulated focus when in a recent release, the measure of the well-built man would write…

Nigeria: A Hell-Hole For Christians – By Femi Fani Kayode