Who will save office holders from CSNAC/NOPRIN blackmail? 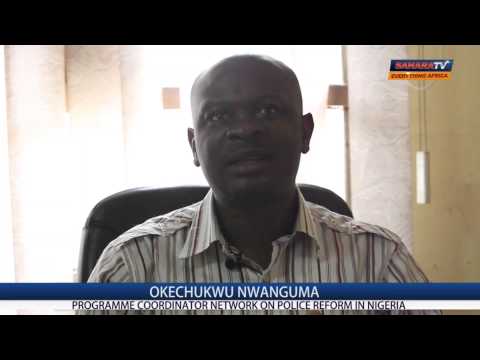 Accountability Project [SERAP] and Human Rights Writers Association [HURIWA], etc. make public pronouncements on National issues, the government of the day takes them seriously because of the pedigree of the respective outfits. However, research has shown that two groups owned by Okechukwu Nwaguma [pictured above], coalition of Civil Society Network Against Corruption [CSNAC] and Network of Police Reform in Nigeria [NOPRIN] were created to attack public office holders and police officers respectively.

Incidentally, the two groups boost of similar characteristics. They are amalgamation of Civil Socity Organisations [CSOs] and NGOs according to the sole promoter. Their modus operandi is simply to single out both public office holders and serving or retired senior police officers for blackmail. They both have Network in their respective acronym.  The only difference between NOPRIN and CSNAC is that while NOPRIN is a fusion of 46 NGOs, the number of CSOs that make up CSNAC is only known to Nwaguma and his proxy.

It has been revealed that Okechukwu Nwaguma cannot float an NGO because of the circumstance that surrounded his dismissal from the CLO where he worked as a paid staff. Fraud related offence was said to be responsible for his sack. The fear of being exposed by genuine activists in CLO who know his past has always made it impossible for him to place advert on three [3] National Newspapers that contains his name as a promoter of an NGO in fulfillment of the law; that is why Nwaguma formed amorphous Coalition and Network to tarnish the reputation of illustrious Nigerians.

In furtherance of CSNACs mission of blackmail and assassination of the character of public office holders, it authored a petition on September 7, 2015 for the removal of Babatunde Adeniran, the newly appointed group executive director, commercial and investment of the Nigerian National Petroleum Corporation [NNPC] over what it called perceived clash of interest.

Perhaps a sinister group or person might have commissioned CSNAC to put spanner in the work of President Mohammadu Buhari [PMB] – led administration’s sensitization efforts in NNPC, as all Nigerians know that PMB, in trying to re-position the corporation, has decided to look outside the NNPC for credible Nigerians to clear the cesspool in the establishment and turn its fortune around for the good of the country. In the light of this, PMB appointed Dr. Ibe Kachikwu from Exxon Mobil Group of Companies as the Group Managing Director of NNPC and the likes of Dr. Victor Adeniran from Total E & P Nig. Ltd.

If CSNAC was not commissioned by those who are not happy with the ongoing reform in the NNPC, rational thinking would have guided them to know that when one resigns from his former place of work, and picks up another job elsewhere, the person’s loyalty changes in favour of his new employer[s]. For instance, now that the chairman of CSNAC, Olanrewaju Suraju, who is probably a proxy, is loyal to Okechukwu Nwaguma, the programme director of NOPRIN, when he, Suraju leaves CSNAC to another coalition network, he ceases to be loyal to CSNAC.  That is how loyalty works.

Since CSNAC believes that Dr. Victor Adeniran’s loyalty is still with Total E & P Nigeria Limited, on account that he had worked for the establishment for 22 years as the Senior Technical Adviser on Oil and Gas Commercial, how come the GMD NNPC, Ibe Kachikwu is not guilty of the same offence as Adeniran, if CSNAC wants us to believe that it was not procured to do the dirty job stopping PMB’s good work in NNPC? In the desperation of CSNAC to justify the confidence its paymaster has on it, the promoters of the outfit forgot that Adeniran was just a former employee of Total E & P Nigeria Ltd, and not a Director of the company which would have qualified him as a promoter or subscriber to the shares of Total.

The desperation of CSNAC to impress its paymaster also manifested to the point of near abuse of intellect and ignorance when Mr Suraju stated that Mr Adeniran had deposed in his witness statement that his office was situated in “Plot 247, Herbart Macaulay Way, Central Business District Abuja, the head office of NNPC. “It is the height of abuse of office on the part of Dr. Adeniran to use the office of a public institution to serve his personal interest. In any case, why did Dr. Adeniran use the address of the NNPC before the announcement of his appointment as a top official of the NNPC”? To start with, if we assume that Dr. Adeniran used public institution’s address for his private purpose, CSNAC should have accuse him of double loyalty, for he must have affinity with NNPC  to be able to use their address. Is CSNAC not even aware that Total office is opposite NNPC Tower?

The reason this writer is trying to put this write-up across to the public is that very soon, Nigerians will start seeing different petitions from the same source, Okechukwu Nwaguma, purportedly from different NGOs’ and CSOs’. For instance, in the coming days, Nigerians are likely to see petitions calling for the removal of Dr. Adeniran from CSNAC and NOPRIN or from Access to Justice [AJ] and NOPRIN or CSNAC and AJ and so on; when these occur, the public should disregard it because they are coming from one man, Okechukwu Nwaguma. He failed in securing foreign grant with NOPRIN; he is now trying to put forward CSNAC to see if he can make both ends meet.

To this end, I challenge Mr. Olanrewaju Suraju to furnish Nigerians with the numbers of CSOs’ that make-up his CSNAC coalition with their certificate of registration from the Corporate Affairs Commission [CAC]; the names and addresses of the promoters of CSNAC. The certificate of merger of the CSOs’ that gave birth to CSNAC as a coalition, if any should be made available to Nigerians. It is imperative that Nigerians know about these facts from CSNAC, so that if anybody feels that his or her image had been tarnished by CSNAC’s petitions, and may want to seek redress in court of law, that fellow will be able to know who to sue. As for Dr. Victor Adeniran, he may well disregard the ranting of Nwaguma and his proxy, Olanrewaju Suraju, as their antics cannot even deceive the most naïve of Nigerians anymore.

RE: Femi Fani-Kayode’s “Nigeria is built on satanic foundation”