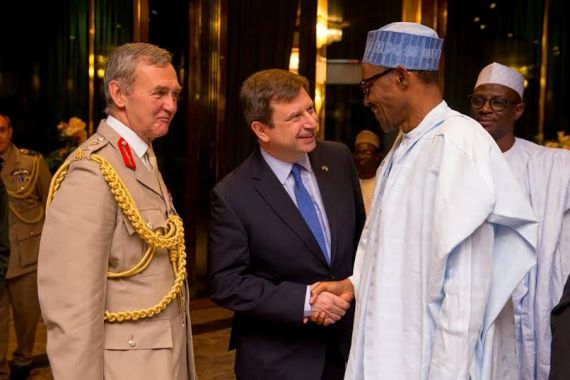 State House Press Release – President Muhammadu Buhari said Thursday in Abuja that significant improvements in national security remains the topmost priority of his administration because other socio-economic initiatives cannot be successfully implemented without adequate security in the country.

Speaking at an audience with Britain’s Chief of Defence Staff, General Sir Nicholas Houghton, President Buhari reaffirmed his administration’s determination to end the Boko Haram insurgency as quickly as possible.

“For a country to be efficiently administered, it must first be well secured because other social and economic initiatives cannot thrive in an atmosphere of insecurity.

“An environment has to be secured before it can be rehabilitated. Nigeria currently has about 1.5 million internally displaced persons and they need to be returned to their homes and brought out of trauma.

“Their schools, hospitals, churches, mosques, farms and livelihoods have been destroyed by insurgents. If they are not catered for, the country may lose their loyalty.

“When Boko Haram is pushed out and the environment secured, normal life will be restored. That is what we are determined to do. Other things like farming, economic activities and social life will then return. Nigerians are quite enterprising,” President Buhari told the British Defence Chief.

The President said that Nigeria appreciated Britain’s support   for the retraining of its Armed Forces and asked for more assistance in other areas such as logistics, equipment and intelligence.

He also called for more international support for regional efforts to improve security in the Gulf of Guinea through which crude oil stolen from Nigeria is shipped.

In his remarks, General Houghton said that the Buhari Presidency was a huge opportunity for Nigeria to make progress.

General Houghton said that he was very impressed with the progress Nigeria has made in the war against terrorism under President Buhari and assured the President that Britain will continue to support the Federal Government’s efforts to end the Boko Haram insurgency.

“We will also help to ensure that the causes of insurgency are removed. Beyond the military dimension, we are also interested in the stabilization dimension,” he said.