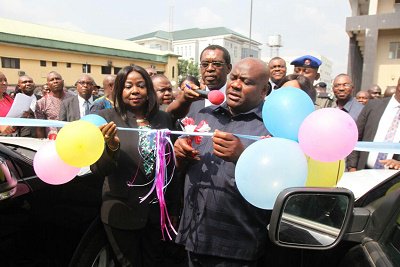 Picture: Rivers State Governor, Nyesom Ezenwo Wike (r) and Chief Judge of Rivers State, Justice Adama Iyayi-Laminkara during  the commissioning of SUVs for distribution  to the judges at the State High Court Complex in Port Harcourt  on  Friday

In what was described as buying the judges over ahead of the upcoming Rivers State rerun election, Governor Nyesom Ezenwo Wike has doled out 35 Sports Utility Vehicles [SUVs] to the Judges of the State High Court and Customary Court of Appeal.

Commissioning the vehicles for distribution  to the judges at the State High Court Complex in Port Harcourt  on  Friday , Governor  said:

“What we are doing as a government is to give judiciary the support to enhance  the  administration of justice “.

The governor said  that judges require the right environment  to administer justice.

He pointed out that effective transportation  framework  is necessary  for judges to arrive  courts on time to preside over cases.

He called on judges to be committed and courageous to the administration  of  justice, saying that judges should  not be discouraged by petitions against them.

He noting that as long as they have clear conscience , they should go  ahead with  the  administration of justice .

He said: “If we rely on what we hear , we will not be releasing official funds to the judiciary  as constitutionally  required  for fear that people will misinterpret it.”

The governor  thanked the State Chief Judge for the  improved revenue  from the courts.

He said that the achievement is as a result of the blocking of leakages  by the Chief Judge .

He appealed to lawyers to pay their taxes so that the state government  will  continue to deliver on projects.

In her remarks, Chief Judge of Rivers State, Justice Adama Iyayi said the gesture of the Governor will help in the administration  of  justice.

She also commended the governor  for his infrastructural  development  in the judiciary.