Wike charges Ikwerre leaders to work with other ethnic groups 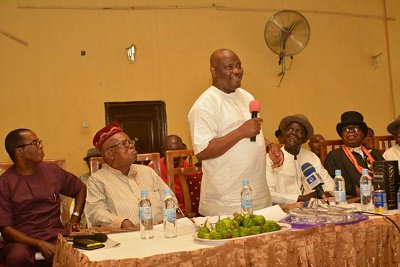 Rivers State Governor, Nyesom Ezenwo Wike has called on the leaders of the  Ikwerre Ethnic Nationality  to work with other ethnic groups  to ensure  the faster development of the state.

This was encapsulated in a press statement issued by the Special Assistant to the Rivers State Governor, Electronic Media, Simeon Nwakaudu.

In a keynote address during the 211th Convention of Ogbakor Ikwerre Cultural Organisation, Worldwide at Rumuche in  Emohua Local Government Area on Sunday, Governor Wike  said  that inter-ethnic cooperation  will enhance  the  development of the state.

Governor Wike who noted that his administration  will  ensure that all local government areas  in the state  benefit  from development projects,  said that the road  projects  pledged for the  four Ikwerre speaking Local Government Areas will be completed in one year.

He said: “Let us work together to develop Rivers State. Working together with other ethnic groups, we will move the state forward.

“As leaders of the Ikwerre Nationality, we must contribute  meaningfully to the development of our communities by enhancing peace and unity”.

He stated that the success of the Amnesty Programme in Ikwerre and Emohua has led to relative peace in the two local government areas.

The governor charged the Ogbakor Ikwerre leadership to work with other stakeholders  to ensure  that people participate in the forthcoming national census.

In his address, outgoing President General of Ogbakor Ikwerre Cultural Organisation Worldwide, Prof Augustine Onyeozu commended  Governor Wike for always identifying  with the Ikwerre cause at all times.

He noted that Governor Wike  has been responsible  for  most of the successes recorded by the Organisation  in the promotion  of Ikwerre  Ethnic Nationality.

The 211th Convention of Ogbakor Ikwerre Cultural Organisation Worldwide attracted  Ikwerre leaders from across the globe to Rumuche in Emohua Local Government Area.