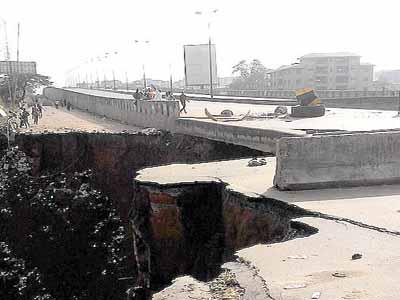 The visiting World Bank experts to Anambra state led by the Task Team Leader(TTL) Dr Amos Abu has urged the citizens of the state to adopt and imbibe as a way of life all the erosion control measures taught them by the group’s field officers and other partners agencies including the Anambra state government.

Dr Abu noted that the involvement of all, especially the affected communities in the long and short term fight against flood and gully erosion menace in the state and in fact all states of the federation has become paramount in fight against the menace.

Speaking to newsmen at the Uruokpala/Umudunu gully erosion site, Dr. Abu who is at the head of other World Bank and United Nations experts and stakeholders in an inspection tour of on-going erosion control projects in Anambra State, said that the human being has been found to be at the centre of all erosion control efforts as well as causes.

The essence of the projects, he said, was to improve the livelihood of the people who live in the shadows and perimeters of gully erosion sites. That in doing so, the people would be restoring hope, life and jobs.  That it was why the role of the communities and community development associations would loom large, the World Bank chief said.

The role of the Nigerian Erosion and Watershed Management Project, (NEWMAP) Dr. Abu reiterated, has a development objective of reducing vulnerability to soil erosion and other forms of land degradation in targeted watersheds.  In doing so, they the sponsors were coming up with a sustainable solution that combines the best of engineering with the human factor, adding that with the human factor is actually the game changer. He explained that the engineering designs were a combination of hard structure such as gabion.  “This will be at work in torrential rainfall and friable soil”.

The team took out time to visit the Nkpor flyover Bridge on the Federal Highway a section of which has collapsed due to unexpected erosion activities at the base of the newly completed bridge. This has forced closure of a section of the highway, thereby creating untold traffic jam at the Newparts/Nkpor market area round the clock.

The inspection team was shocked by the devastation that would occur if quick intervention and remedial measures were not taken at once, as surrounding houses, pedestrians, and motorists are at the risk of collapsing into the erosion gully.

At the Omogba erosion site, just a kilometer away from the flyover bridge site, an erosion finger originating from the Nkisi River valley, is also threatening to cut the same Onitsha-Enugu expressway.  A concrete channelization programme is on-going.  The inspection team led by Dr. Amos Abu visited the on-going engineering project, met with a group of Omogba community and observed that members of the community were part of the efforts to control flood erosion and commended the efforts of the community leader Mr. Innocent Obasi.

A woman leader in the community, Mrs. Ngozi Otu in an interview said they were taken into confidence in the on-going fight against soil erosion adding that they were taught the ‘dos’ and ‘don’ts’ of flood erosion and landslides and that there were sanctions against blocking of flood channels with refuse.

And finally at Uruokpala/Umudunu Abagana, the team numbering over 30, make up of World Bank staff, Focal Non-Governmental organizations, members of the state ministry of environment and the press also inspected the on-going flood channelization project.  After inspection the team had an interactive session with members of the community.  The community organization was full of gratitude to the World Bank, the Federal and State government for coming to their rescue.

The chairman of Abagana Erosion watershed Management Association Mr. Godfrey Chukwuma Nzeakor told journalists that the community was always involved in the erosion control activities, adding that the contribution of the community development association could not be qualified in monetary terms.  He said that they contributed in kind including accommodation and logistics.  Mr. Nzeakor assured that after the construction, the community would take over the cleaning of the channel to ensure that it is never blocked.  He said that traditional worshippers were pained that their shrine near the gully is affected by the construction of the flood channel but, however, have been cooperating in the fight against flood erosion and landslides.  Asked about his impression about the on-going projects at the different erosion sites inspected, the Task Team leader, Dr. Amos Abu said he was satisfied with the job done so far.