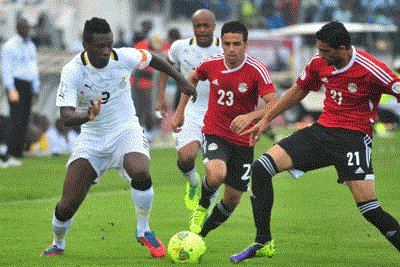 Goals by Mohamed Saleh in the first half and Abdallah El Said four minutes to the end of the second half were just enough to make sure that the Black Stars didn’t shine.

The win keeps Egypt at the top of the table with six points, three points each from their first two games.

Ghana are stuck to third position after losing to Egypt 0-2 today.

They are three points adrift from second-placed Uganda, who have four points.

Congo are the whipping boys of the group, with no point earned yet.

Ghana will next know their fate when they meet Congo on 28 August and 2 September next year, in the next round of group matches.

Egypt will then take on Uganda, which beat Congo 1-0 in Kampala.

Ghanaians suspected their team had a mountain to climb on Sunday when they met the Pharaohs in Alexandria as they had embarked on prayers for the success of Black Stars.

Christians in Accra thronged churches to pray for Black Stars’ victory over the Pharaohs of Egypt in Alexandria later on Sunday.

At the Wesley Cathedral Methodist Church in Cape Coast, the congregation prayed for the players to be up to the task of not only keeping the Egyptians at bay but winning the match.

The Black Stars had  played a goalless draw at home to the Cranes of Uganda in the opening World Cup qualifier for Russia 2018.

On Friday, Ghana Football Supporters Union visited the residence of the National Chief Imam Dr Sheikh Nuhu Shaributu where Muslim prayer was said for the players.

What Anambra State needs in 2017 is another Peter Obi

HIV/AIDS: FG to inject novelty to the fight – Health Minister