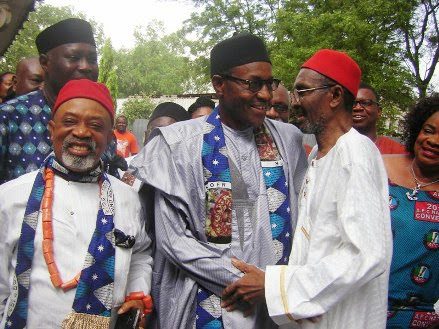 into stormy waters as the trio of Governor Willie Obiano of Anambra State, HRH Alfred Achebe, Obi of Onitsha and Ambassador Emeka Azikiwe (Owelle’s sibling) had fixed an impromptu burial aimed at ensuring that Buhari’s presence is frustrated.

The stance of the trio had caused great tension within the Azikiwe family and Onitsha leaders that some groups had vowed to boycott the burial slated for Saturday, 12th of September, 2015, if efforts to get Buhari in physical attendance is deliberately frustrated.

Speaking with Rev Obinna Akukwe, Director General of Igbo Mandate Congress (IMC) over the crisis, the youngest brother of Dr Nnamdi Azikiwe, Akunne Ara Azikiwe decried the burial fixed for the 12th as “an attempt to bury the late Owelle like a fowl in order to punish him in death for his friendship with Buhari”.

The Spiritual Head of the Azikiwe family and oldest family member, Nwamulunamma Onuora Azikiwe, who also is the Chief Mourner, has distanced himself from the burial slated for Saturday. Speaking to leaders of Igbo Mandate Congress (IMC) today, he said that the family will not attend any burial that deliberately intends to exclude Buhari and the Federal Government from active participation.

The President of Umuada Azikiwe (representing elderly women of the Azikiwe clan), Chief Mrs Chiago Iwuobi (nee Azikiwe) had also distanced the Umuada from the impromptu burial. Umuada Azikiwe on Tuesday last week led by Chief Mrs Iwuobi protested at Governors Lodge Awka with a strongly worded letter to the governor, delivered to both the Secretary to the State Government and the Chief of Staff, distancing the family from the purported burial. Copies of the letter made available to Igbo Mandate Congress made it clear that the governor should allow Buhari to lead in the preparations for the event.

Yesterday the women also protested at Onisi Onira residence of the great Zik over the involvement of Ambassador Emeka Azikiwe in the shadow affair.

The Assistant National Publicity Secretary of Ohanaeze Ndigbo and Chairman of Igbo-Ohanaeze Integrity Groups, Barrister Emejulu Okpalaukwu described the plot as an attempt to ensure that president Buhari does not have any foothold in the South East. Okpalaukwu told Rev Akukwe that “agents of divisive tendencies whose antecedents have always put Ndigbo in unnecessary battles with their neighbors are at work again to sabotage President Buhari’s effort to give Azikiwe’s son a befitting burial”.

The Personal Assistant to the late Owelle, Mr Chukwuma Njaka have also distanced himself from the burial, describing it as activities of disgruntled politicians about to dishonor his boss over his principled stance on national issues. He told Rev Akukwe that President Buhari had wanted to turn Zik’s Mausoleum into a national institute and wondered why he is being frustrated.

Meanwhile the Director General of Igbo Mandate Congress (IMC) Rev Obinna Akukwe had described efforts to frustrate President Buhari from attending the burial of the late Owelle as not helping Igbo Interests. Speaking to concerned friends of Owelle yesterday, at Onitsha, Rev Akukwe said that “Buhari is only interested in honoring a friend, confidant and nationalist who shares same ideals and Spartan lifestyle with him, and I expect Igbo leaders to use the occasion to present a wish list to the President, instead of unending criticism.

“The same people who abandoned Owelle over the years, suddenly picked interest because a Fulani born President wanted to honor an abandoned kinsman” He condemned the removal of Owelle’s corpse from the morgue into a hidden location, by those afraid of the dead, against the consent of his biological sons, the umuada’s and the umunna’s and called for the physical auditing of the remains before any burial.

Igbo Mandate Congress (IMC) had earlier in May exclusively reported that some elements within the Onitsha ruling house have teamed up with some disgruntled politicians in the South East to ensure that the late Zik’s son is buried like a fowl. The grouse of these disgruntled politicians is that Owelle Chukwuma Azikiwe preferred Buhari style of politics of integrity and honesty to the incumbent bandwagon and urged Igbos to support him. Unfortunately, Owelle died after Buhari’s Victory and they decided to use the occasion of his death to punish him in the grave yard.

This plot to bury Owelle Azikiwe like fowl is coming to pass with a burial slated in two days’ time, and no notable Igbo or Nigerian leader has been notified. The corpse of Owelle Azikiwe was last week removed by unknown persons from Borromeo Hospital Onitsha, and allegedly taken to a shrine near Okija, before being finally deposited at a hospital in Igboukwu. The purpose of removing Owelle’s corpse from Borromeo Hospital, opposite Zik’s House, to Apex Hospital, Igboukwu, about thirty miles from his residence, without authorization, by persons known to be in open conflict with the dead man, is already creating tension.

President Muhammadu Buhari had earlier in July met with a delegation from the Azikiwe family where he indicated interest to participate fully in the event.

During the meeting and inspection, it was also discovered that historical documents which the Great Zik of Africa handed over to his first son, Chukwuma Bamidele, was removed without authorization from his house and burnt, while those that weren’t engulfed by the inferno, were found littered all over the compound .

President Buhari later in August sent Mr George Ossi, Permanent Secretary, Federal Ministry of Lands, Housing and Urban Development, to supervise renovation works on the dilapidated Onisi Onira Residence and the abandoned Zik’s Mausoleum. Efforts by Mr George Ossi to audience with Governor Obiano were rebuffed, and after he left in frustration, the governor later granted audience to the Federal Controller of Works, Anambra State, where he expressed displeasure at Buhari’s interference with the burial, including on-going renovations.

Frustrated family members had blamed the foot-dragging of Senator Ngige as being responsible for the embarrassment in the family. According to a leader who spoke on conditions of anonymity, “ we had expected Ngige to have named a burial committee and commenced preparations as instructed by Buhari, but why he foot-dragged till Ambassador Azikiwe and Obi of Onitsha, avowed enemies of late Owelle, reached out to Governor Obiano, and countered the earlier arrangement”

Ambassador Emeka Azikiwe, Governor Willie Obiano and Obi Alfred Achebe, Obi of Onitsha have dared Buhari and the Federal Government over the issue and vowed to carry on with the burial.

The two biological sons of the late Owelle, Dr Chinwe Azikiwe and Dr Ikechukwu Azikiwe, all based outside Nigeria, are already in the country, holding frantic consultations to avoid impending embarrassments.